The photo shows fire at a government office in Indonesia in 2016, not Islamic school in Liberia

A photo has been shared in multiple Indonesian blog articles and Facebook posts alongside a claim that it shows a fire incident at an Islamic boarding school in Liberia that killed 100 people. However, the claim is false; the photo was taken as a fire ripped through a local government building in Indonesia in 2016.

"Verily to Allah We Belong and to Allah We Shall Return. Please accept our condolences," reads an Indonesian-language post, which was uploaded in a Facebook group with more than 7,200 members on June 23, 2022. 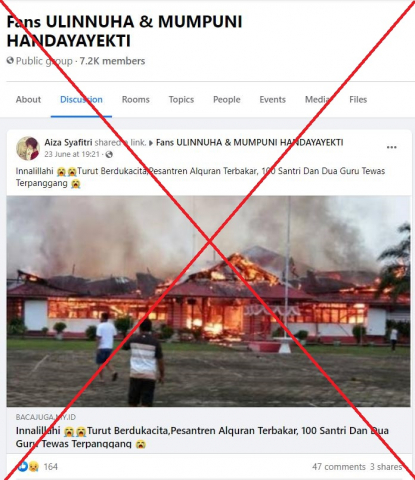 The post, which shows a photo of fire engulfing a building, shares a link to a blog article, which was published in June 2022.

The article partly reads: "A Koranic boarding school near Monrovia, the capital of Liberia, caught fire in early hours of Wednesday." 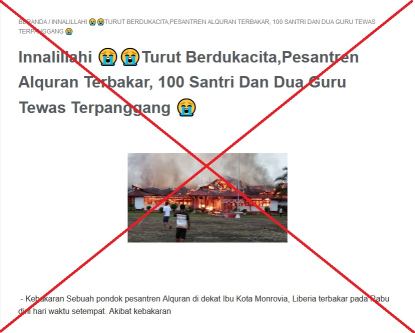 The photo was shared in various blog posts with identical headlines, including here, here, here and here.

Some of the blog articles were shared on Facebook, such as here and here, in groups with a total membership of 126,000 people.

A reverse image search on Google found the photo published in an article by Indonesian news outlet Detikcom on November 19, 2016.

Screenshot of the Detikcom report

The headline reads: "The cause of the fire at the Melawi regent's office in West Kalimantan was allegedly an electric short circuit".

Detikcom credited the photo to the West Kalimantan Police.

The same photo was published by local media outlet Suara Pemred Kalbar on the same date, in an article that also said the fire broke out at the Melawi regent's office.

Below is a screenshot comparison of the photo in the misleading post (left) and the original photo published by Detikcom (right).

The same fire incident was also captured in this video report by Indonesian broadcaster Kompas TV, which was published on November 20, 2016.

According to multiple news reports, there were no casualties in the Indonesian blaze.

The text in the blog posts sharing the photo appears to describe a fire at a Liberian Koranic school in September 2019.

AFP reported on the blaze, which killed at least 26 pupils and two teachers.

AFP Fact-Check previously debunked a false claim that misused another photo from the same scene of the Melawi regent's office fire incident.