An image of an animal has circulated in multiple social media posts alongside a claim that it shows a mite called Demodex that lives on the human face. However, the claim is false; the picture shows a silkworm caterpillar seen under an electron microscope.

The photo has been shared on Facebook here on December 21, 2018.

The Indonesian-language caption translates to English as: "Are you lonely? I don't think so. Demodex is a mite that lives on your face. It is a forever friend." 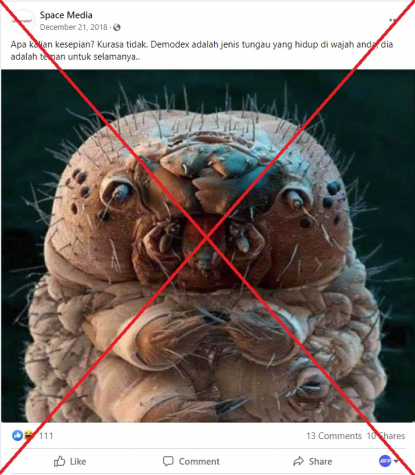 Demodex mites are microscopic, eight-legged tiny parasitic mites that live in or near the hair follicles of mammals, including humans.

Demodex folliculorum and Demodex brevis are two species typically found on humans, usually on parts of the face, such as the cheeks, nose, chin and forehead.

Most people have Demodex, but they are usually harmless, health experts say. However, if there are too many, the mites can cause a skin condition called demodicosis.

The same photo has circulated as recently as May 2022 here, as well as on Instagram here and on Pinterest here.

The image also appeared with a similar claim in Malaysian and in English on Twitter, where it has been retweeted more than 1,900 times.

Reverse image searches on Google found that the photo has been published here on the website of stock photo agency Alamy .

It also says that the photo is magnified by 25 times when it is printed 10 cm wide.

The picture is dated May 19, 2004, and is credited to Science Photo Library, a science and medical stock photo agency.

Below is a screenshot of the genuine photo on Alamy's website: 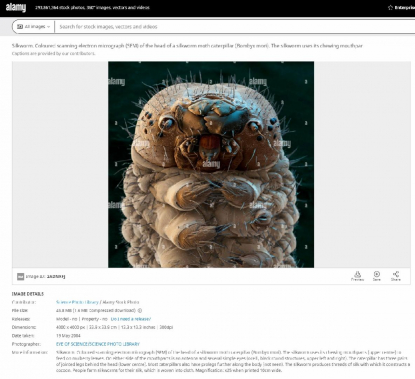 The same photo of the silkworm is also published on Science Photo Library's website here.

Both Alamy and Science Photo Library credit the picture to Eye of Science, Germany-based photographers who specialise in microscopic photography.

The image of the silkworm can be seen in a photo collection of microscopic insect images published by Eye of Science here, called "Metamorphosis". It is pictured alongside its adult form, the domestic silk moth.

Newly hatched silkworm larvae are approximately 2 mm to 3 mm long and they can reach a maximum length of 75 mm during a 45-day growing period.

In contrast, the Demodex or the face mite is a much smaller creature, measuring between 0.15 mm and 0.4mm long.

Under a microscope, the mite looks slightly transparent.

Science Photo Library published coloured microscopy images of Demodex mites, such as here and here -- both are magnified hundreds of times.

Below is an image of a Demodex mite on the Science Photo Library website: 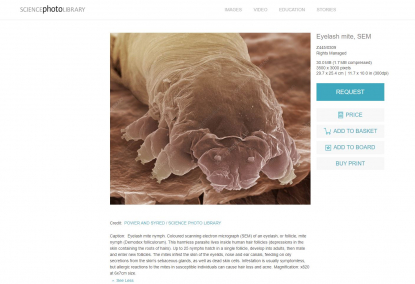 Screenshot of a Demodex picture on Science Photo Library's website