Footage of a woman attacked in a subway station is circulating in Facebook posts and news reports that claim it shows a student who died after she was hit by a train in New York in May 2022. However, the video shows an assault in 2019 unrelated to the student, whose cause of death was still under investigation, police told AFP on May 23, 2022.

"Zinat Hossain (24), a student of Hunter College in Brooklyn, died at the scene while she was returning home. She was shoved under the train by a miscreant," reads a Bengali-language Facebook post from May 13.

The graphic footage shows a confrontation between a group of men on a subway platform, before one of them shoves a woman into the side of a parked train carriage. 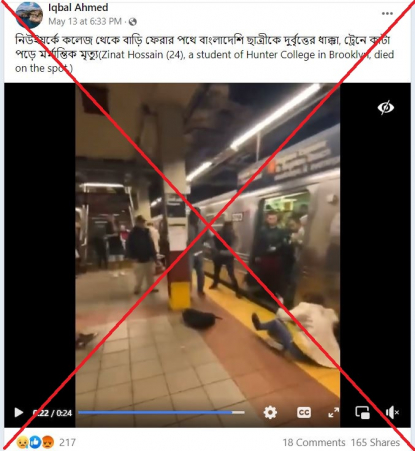 Zinat Hossain, a Bangladeshi-born student at Hunter College in New York, died after she was hit by a subway train in the city on May 11, Bangladeshi media reported here and here.

A spokesperson for the New York Police Department told AFP on May 23, 2022 that the cause of death had not yet been determined.

The video was viewed more than 20,000 times in a similar Facebook post, while screenshots from the footage circulated in news reports about Hossain's death, including here and here.

However, the video shows a woman who was attacked in a New York subway station in 2019.

Keyword searches and reverse image searches found the video in a tweet from October 23, 2019.

The tweet was published in a report by local news outlet the New York Post on October 24, 2019, headlined: "Watch: Brute shoves woman head-first into subway train in Brooklyn".

"A shocking video shows a man shoving a woman into a train at a Brooklyn subway station Wednesday night in what appeared to be an unprovoked attack," the New York Post reported.

It said the attack happened at the DeKalb Avenue subway station in Brooklyn.

In a later report, the New York Post said the suspect was a man who had previously been arrested multiple times for offences in the subway.

Below is a screenshot comparison of the video shared in a false context (left) and posted on Twitter in 2019 (right): 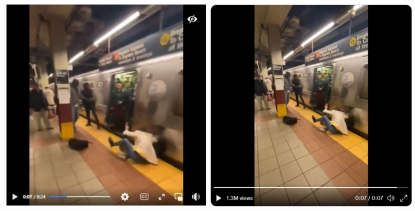 Various local media published screenshots of the video in reports about the 2019 attack, including the New York Daily News and Gothamist.

A spokesperson for New York Police Department spokesperson said the video shared in a false context was unrelated to Hossain's death.

"The incident [in the video] that occurred on October 23, 2019 in the subway system is not the same as the person (Zinat Hossain) above," the spokesperson told AFP.

The spokesperson did not respond to AFP's requests for comment on the condition of the woman in the video.