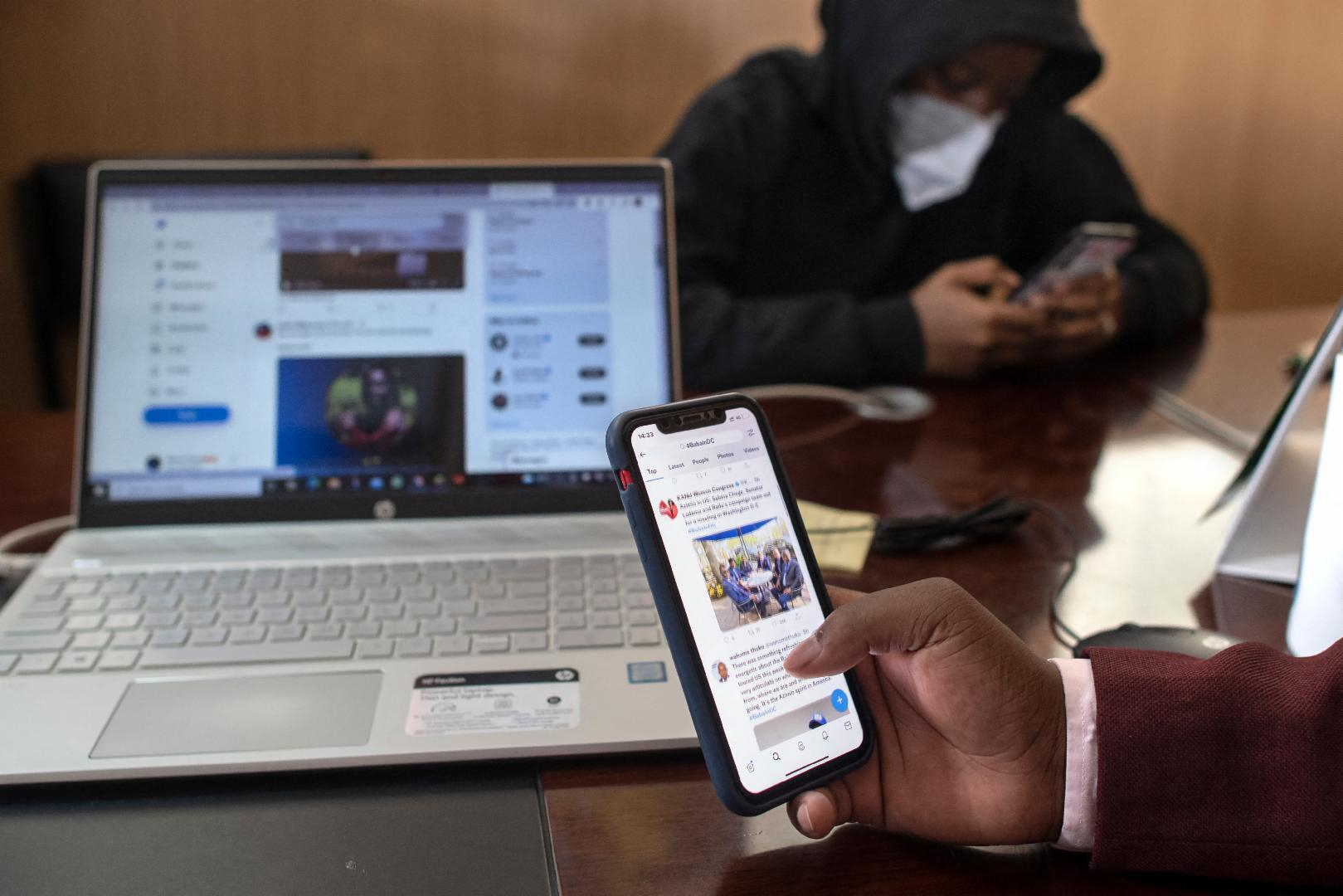 As Kenya prepares for general elections in August, social media platforms are awash with slick graphics promoting false and misleading quotes purportedly uttered by politicians. The inclusion of logos belonging to local media organisations helps to give the posts a semblance of credibility. However, AFP Fact Check found they are fabricated pieces of content created with one purpose in mind – to deceive voters.

One such false post, published on Facebook on May 19, 2022, was attributed to the leader of the Wiper Democratic Movement Kenya (WDM-K) party, Kalonzo Musyoka. 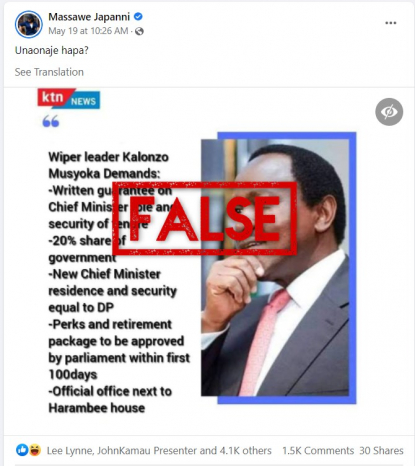 The post contained a picture of Musyoka and the logo of the television channel KTN News Kenya.

It surfaced after former prime minister Raila Odinga offered Musyoka a chief minister role if he became president in the election scheduled for August 9, 2022. Musyoka had initially been shortlisted as a possible running mate to Odinga but then lost out to politician Martha Karua. In response, Musyoka announced he would run for the top job himself.

According to the caption, Musyoka had made a series of demands before accepting any ministerial role, including a new residence and "perks and retirement package".

The claim was also shared in the same format on Facebook here, here, and here.

Kalonzo’s Wiper party was initially part of a coalition backing Odinga as its presidential candidate. However, Kalonzo withdrew his party from the alliance to contest the presidency instead.

However, there is no evidence of a list of demands made by Musyoka to Odinga that was published by KTN News.

A search for the purported quote on the KTN New's social media accounts (here and here) and website came up empty.

The media company also distanced itself from the post on May 18, 2022.

“FAKE NEWS ALERT: This is NOT a genuine post from KTN News,” the firm wrote on its Facebook page.

“Be cautious NOT to fall for political propaganda and deep fakes during this electioneering season. For GENUINE news updates VERIFY from our accounts @StandardKenya and @KTNNewsKE."

Kitui Senator Enock Wambua, a spokesman for the Wiper party, told AFP Fact Check that “the quote is not true.”

“This is propaganda being peddled by desperate people who want to taint the good name of our party leader,” Wambua said.

On this occasion, former Kiambu governor William Kabogo purportedly said he had defected from the Kenya Kwanza coalition headed by Deputy President William Ruto. The post implies that Kabogo accused Ruto of supporting a push by the current government to deny Kenya's central region “resources and fair representation”.

The post mentions Mt. Kenya, in reference to the central provinces and the people who live there – the Kikuyu, Embu, and Meru communities. 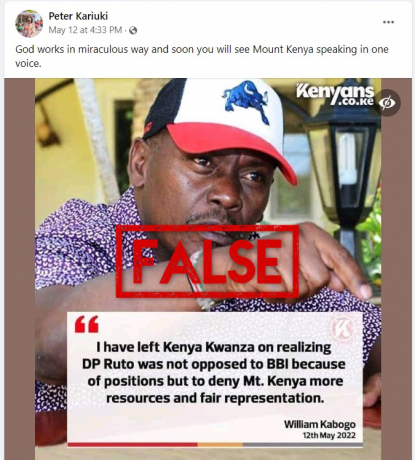 Kenyatta has backed Odinga to succeed him while Kabogo supports Ruto and his Kenya Kwanza coalition. Contrary to the claim, Kabogo remains in Ruto’s camp, he told AFP Fact Check.

“My party Tujibebe Wakenya is in Kenya Kwanza to stay and we support the deputy president’s presidential bid,” he said.

On May 29, 2022, two weeks after the post was published, Kabogo accompanied Ruto and other Kenya Kwanza leaders on the campaign trail in Kirinyaga country.

A search on the news platform's website and social media accounts (here and here) failed to turn up the quote.

“This post did not emanate from our media house, it does not conform to the in-house branding rules and did not go through the multiple approval checks set in place to prevent misreporting. We, therefore, flag it as FAKE,” read the company’s statement on Facebook.

The same news site was cited as the source of another doctored quote posted on Facebook on May 4, 2022.

It claimed that politician Oburu Odinga had announced an end to his bid for the Siaya County senate seat in favour of someone younger.

“I want to categorically put it that I drop my senatorial bid for Siaya for a younger and promising member of the community more so to my competent opponent Julius Okinda (sic),” the post reads in part. 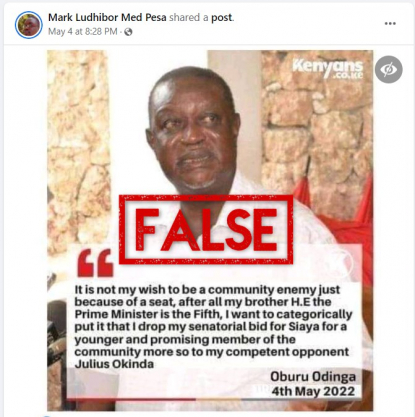 The 78-year-old Odinga, elder brother of Raila Odinga, is a Kenyan representative in the East African Legislative Assembly.

His decision to contest the county seat was reported by local Kenyan media and there’s no news of him withdrawing from the race.

Kenyans.co.ke told AFP Fact Check that it didn’t publish the purported quote. “There has been an increasing number of false political quotes published by unknown people associated with the news site on Facebook and other social media platforms” in the recent past, spokesman Brian Muuo said.

Edwin Sifuna, a spokesman for the Orange Democratic Movement (ODM), told AFP Fact Check that “Oburu Odinga is our candidate for the Siaya senatorial seat, nothing has changed”.

On May 9, 2022, a quote posted on Facebook and purported to have been published by local broadcaster NTV Kenya, claimed that the Azimio Kenya gubernatorial candidate for Nairobi, Polycarp Igathe, refused to campaign in the slums because, according to him, such areas are “prone to breed goons who don't even vote”. 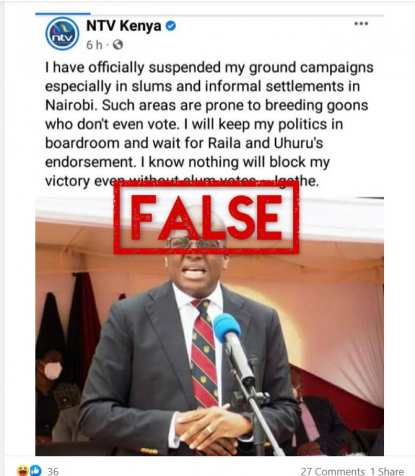 Before announcing his candidature for the Nairobi gubernatorial position, Igathe was the Chief Commercial Officer at Equity Bank.

“NTV did not publish such a quote on our social media pages or any of our news platforms,” said Churchill Otieno, a spokesman for the Nation Media Group, the mother company of NTV.

Igathe himself also rejected the quote as false.

“I have been campaigning in both formal and informal settlements in Nairobi and I have never been disrespectful to my voters by uttering such words,” he told AFP Fact Check.

A quote claiming that Gatundu South lawmaker Moses Kuria announced his departure from Ruto’s Kenya Kwanza alliance was published on Facebook on May 12, 2022. The post featured the logo of the Nation news site and a QR code offering more on the purported story.

“I can't stay in Kenya Kwanza where Mt. Kenya is being given a weak and useless DP position yet actual power to run Gov't is going to a region that will bring less votes than Central,” the quote reads. 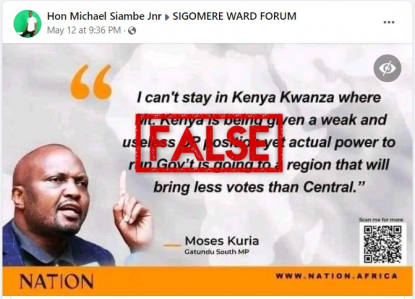 “FAKE NEWS ALERT! Please be advised that this quote doing rounds on social media is fake. Do not fall for fake news,” the post reads.

AFP Fact Check also scanned the QR code and found that it doesn’t belong to the Nation newspaper but to clothing line website Hem & Stitch.

The rising dominance of social media sites in Kenya has opened up a new front in the country’s politics, with politicians desperate to draw the attention of the country's 12 million social media users.