Skip to main content
World Health Organization (WHO) Director-General Tedros Adhanom Ghebreyesus delivers a speech on the opening day of 75th World Health Assembly of the WHO in Geneva on May 22, 2022. ( AFP / JEAN-GUY PYTHON)

Claims that a planned World Health Organization (WHO) meeting in May 2022 was cancelled after "massive explosions" at Geneva Airport in Switzerland have been shared in several social media posts. However, the claim is false. Although flights to and from Geneva were disrupted following a fire next to the airport, the WHO meeting went ahead as scheduled.

A screenshot with an image showing black smoke spewing into the air was shared on Facebook here on May 24, 2022.

Text on the screenshot reads: "Preparing for the arrivals of the WHO 'elite' where a Plandemic treaty meeting is being held two massive explosions erupt at the Geneva Airport, Switzerland.

"The meeting was canceled after the Geneva airport was coincidentally blown up. Have a great Sunday."

"Plandemic" refers to a conspiracy theory that the coronavirus was designed in a lab and world health leaders knew the crisis would occur. 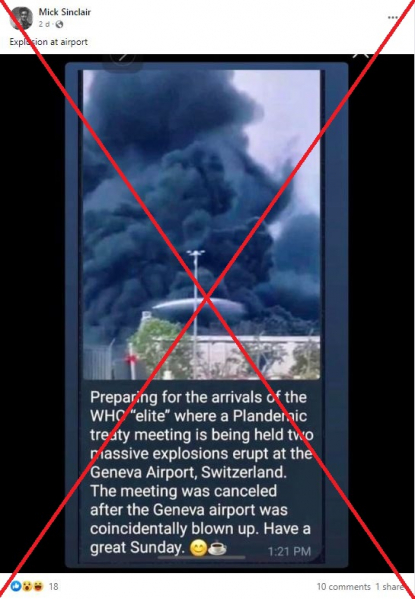 Comments on the posts suggest some users believed the WHO meeting had been cancelled.

"Hope this puts a spanner in their works," reads one comment. "Great news," reads another.

The 75th meeting of the World Health Assembly -- the WHO's main decision-making body -- went ahead as scheduled between May 22 and May 28 in Geneva, Switzerland.

WHO Director-General Tedros Adhanom Ghebreyesus welcomed delegates on the meeting's opening day, which was streamed live on the organisation's YouTube channel here.

Tedros began his speech by acknowledging "there is no substitute for meeting face-to-face."

At the assembly, member states agreed to overhaul how they fund the UN health agency, in a bid to strengthen the organisation and make it more able to respond to global health crises.

Fire next to airport

The image in the misleading posts corresponds to this video published on YouTube by news agency Storyful on May 22.

Below is a screenshot comparison of the image in the misleading post (left) and the Storyful video (right): 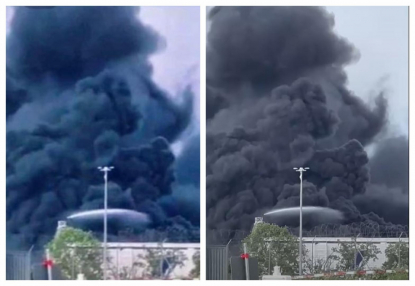 Flights to and from the airport were temporarily disrupted by the fire, which broke out just beyond its perimeter fence on May 20, an airport spokesman told AFP.

The fire occurred at a construction site intended to be a future centre for asylum seekers.

Geneva Airport also published a press release in French on its website here on May 24, which includes a video that shows the fire from a similar angle to the image in the misleading posts.

According to the press release, air traffic was disrupted for nearly two hours, with 14 flights diverted to other airports and 22 flights from Geneva cancelled.