An image has been shared thousands of times in Hindi-language social media posts that claim it shows members of India's opposition Congress party meeting under the colours of the Pakistan flag -- white and green. This is misleading; the party shared another photo of the event that shows the venue's ceiling was actually decorated with the colours of India's national flag and the Congress party's flag -- saffron, white and green.

The Hindi-language caption translates as: "The Pakistan national flag colours are on top with saffron on the ground! This photo is from the ongoing Congress meeting."

The national flag of Pakistan is white and green, with a large white crescent and star.

India's national flag is a horizontal tricolour of saffron, white and green with the Ashoka Chakra, a 24-spoke wheel, in navy blue at its centre.

The nuclear-armed rivals have fought a series of wars since independence from Britain in 1947. 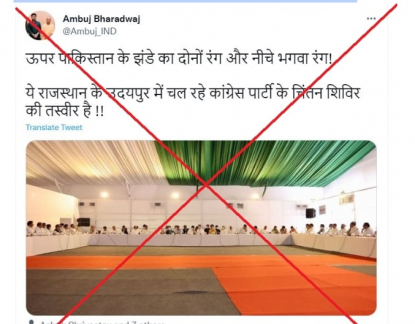 The image circulated online after India's Congress party held a three-day meeting from May 13 to May 15 at the Taj Aravali resort in Udaipur, in the country’s western state of Rajasthan.

Comments on the posts suggest some users were misled.

Another referred to Congress as the "Traitor party with Pakistan flag".

A search on the Congress party's social media accounts found another photo taken from a different angle of the same meeting.

It shows party members sitting inside under a ceiling displaying the colours of India's national flag -- saffron, white and green.

The same colours also feature in the Congress party's flag, as shown in this AFP photo.

Below is a screenshot of the photo shared by the Congress’ official Twitter account from the party's meeting on May 14:

More images of the ceiling decorated with saffron, white and green were shared by the Congress party on its Twitter account here and here.