Skip to main content
This picture taken on May 3, 2022 shows a view of the head of the Enthroned Khafre (Chephren) funerary statue of the Fourth dynasty (2613-2494 BC) Ancient Egyptian pharaoh and builder of the second of the Giza Pyramids, on display at the Egyptian Museum in the capital Cairo. ( AFP / Amir MAKAR)

On the right-hand side, it appears to show a Taegeuk symbol -- the central feature of the South Korean flag -- in a purported artwork from ancient Egypt.

"[Breaking news] Taegeuk symbol found in an ancient Egyptian pyramid... Historians around the world shocked," reads the Korean-language text superimposed on the image. 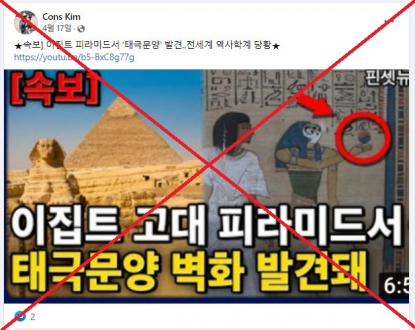 Screenshot of the misleading claim shared on Facebook. Captured May 23, 2022.

The image was also used as a thumbnail for this YouTube video about various historical periods. The video, posted on a channel called "Pincette News" has been viewed more than 36,000 times.

At its five-minute 48-second mark, it includes another image that purports to show ancient Egyptian artwork featuring the taegeuk symbol.

The image's caption reads: "[Ancient Egyptians] drew the history of their ancestors, and drew the Taeguk symbol passed on from the Goguryeo people." 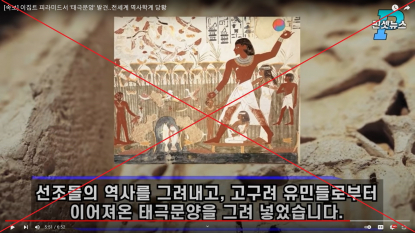 Screenshot of the misleading claim shared on YouTube. Captured May 23, 2022.

The ancient Korean kingdom of Goguryeo existed between 37 BCE and 668 CE.

The doctored images were shared alongside a similar misleading claim on Facebook here, here, and here.

A reverse image search on Google found the first image corresponds with a papyrus scroll stored in The British Museum.

Below is a screenshot comparison of the first doctored image (L), and the papyrus scroll stored in the British Museum (R), with the corresponding section in the original artwork marked by AFP in blue:

Screenshot comparison of the first doctored image shared in the YouTube video (left), and the papyrus scroll stored in the British Museum (right), with the corresponding section in the original artwork marked by AFP in blue

The scroll's description reads in part: "Book of the Dead of Hunefer".

A spokesperson for New York's Metropolitan Museum of Art told AFP the second image corresponds with the museum's replica of an ancient Egyptian mural from the tomb of Nakht in Thebes, Egypt.

The artwork is titled "North Side of the West Wall of Nakht's Offering Chapel."

Below is a screenshot comparison of the second doctored image (L), and a section of the replica in the Metropolitan Museum of Art (R):

Screenshot comparison of the second doctored image shared in the YouTube video (left), and a section of the facsimilie of the mural stored in the Metropolitan Museum of Art (right)

'Not what the ancient Egyptians intended'

No iconography or motifs resembling the central symbol in the South Korean flag have been found in surviving ancient Egyptian artwork, experts say.

Professor Peter Der Manuelian, director of the Harvard Museum of the Ancient Near East, told AFP that he knew "of no ancient Egyptian examples of the [symbol]."

"Occasionally, people find decorative motifs or recarved hieroglyphs or other figures that seem to resemble modern symbols of one form or another, but that’s not what the ancient Egyptians intended," he said.

A spokesperson for The Metropolitan Museum of Art said they did "not know of an ancient Egyptian hieroglyph or motif of a circular shape with an interlocking spiral design that would be confused with this yin-and-yang symbol".

AFP previously debunked a false claim made by the same YouTube channel here.