Skip to main content
Seagulls stand on melting ice on the sea in Vaasa, Finland in April 2020 ( AFP / Olivier MORIN)

A Facebook post says satellite images showing Arctic sea ice in May at two points over a 33-year timespan are evidence the ice is not shrinking due to human-caused climate change. But the head of the organization that produced the data said it had been misinterpreted: The broader overall trend of declining sea ice is widely documented.

"Below are images of the Arctic Sea Ice from May 13, 1989 and May 13, 2022, courtesy of the satellites monitored by the National Sea Ice Data Center. See a difference worth losing sleep? Neither do I," says the post dated May 14.

"Yet, every few days I see in the press that 'as the Sea Ice continues to disappear' yah da yahda! For sure it waxes and wanes but there simply is not enough reliable data to prompt the world's population to do without the energy it desperately needs," it claims. 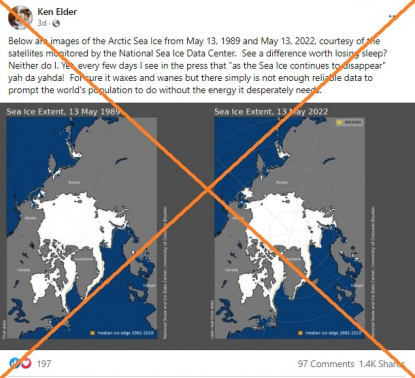 Sea ice is frozen ocean water, distinct from icebergs, ice sheets, ice shelves and glaciers. Its decline is one of the impacts documented in reports by the United Nations Intergovernmental Panel on Climate Change (IPCC).

The Facebook post includes side-by side satellite images showing nearly identical expanses of sea ice in the Arctic. National Snow and Ice Data Center (NSIDC) Director Mark Serreze told AFP in an email the data shown in the post is correct, but it was taken out of context.

He said the decline of sea ice in May is "not large" because, in winter and spring, the ice reaches the shoreline and cannot spread any further.

"It is hence not surprising to find similar extents on the same date in the early and most recent part of the May record," he said. "Having said this, extent (square kilometers of ice) is not the total story ... the ice thickness is much less today than it was in past decades, hence ice volume has strongly declined."

Serreze also said the "key time of year to assess the evolution of the sea ice" is the end of the melt season in September.

"The September trend in monthly average ice extent is -12.7 percent per year through 2021," he said. Satellite records of Arctic sea ice extent go back to 1979.

To measure the impact of global warming on sea ice, scientists track changes in its average extent and volume over time rather than on single dates. They compare monthly levels to the average for a reference period of 30 years to calculate a percentage change or "anomaly."

According to the Colorado-based NSIDC, the extent of Arctic sea ice for 2022 so far is noticeably lower than the extent for the reference period 1981 to 2010. 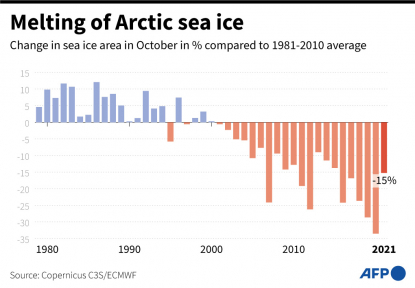 Tamsin Edwards, a climate scientist at King's College London, told AFP: "You can see an even clearer picture if you look at the trend for April over time. Yes, the sea ice waxes and wanes from year to year, but the overall trend is a decline."

She said a more fair comparison would consider "two averages or central values, not two individual data points which could be higher or lower than the average." Although some of the decrease since 1979 is "due to long-term natural variations," Edwards said, "the majority is down to us."

The IPCC says: "It is unequivocal that human influence has warmed the atmosphere, ocean and land."

In a summary of one of its major reports last year, the IPCC said: "In 2011–2020, annual average Arctic sea ice area reached its lowest level since at least 1850." 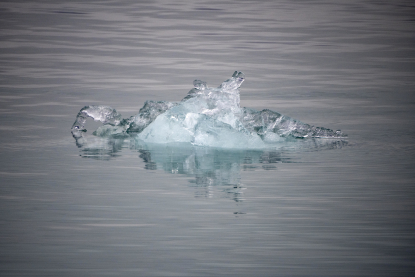 This ice block broke away from a glacier in Svalbard, Norway in September 2021 ( AFP / Olivier MORIN)

The IPCC rated this according to its guidelines as a "high confidence" finding, indicating an eight in 10 chance that it is valid. It added that "late summer Arctic sea ice area was smaller than at any time in at least the past 1,000 years (medium confidence)."

Skeptics sometimes cite the circumspect style of IPCC's confidence ratings to cast doubt on its credibility. Some say, for example, that a "medium" confidence rating should not be grounds for asserting something as a fact.

However, scientists typically avoid speaking of certainty and instead present their findings in terms of probability. And the scientific consensus on human-caused global warming is overwhelming.

In an email to AFP, a spokesperson for the Copernicus Climate Change Service team cited satellite records from NSIDC and the European Satellite Application Facility on Ocean and Sea Ice that show a general decline in sea ice starting in 1979. The annual trend was similar even for just May, which is the focus of the Facebook post. 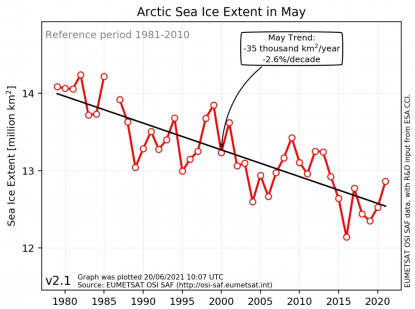 This graph provided by Copernicus shows the declining trend in Arctic sea ice reflected in annual data for the month of May, compared to a 1981-2010 reference period ( EUMETSAT OSI SAF data, with R&D input from ESA CCI / )

"There is day-to-day, month-to-month and year-to-year variability in the Arctic sea ice cover as in many other climate variables. Therefore, one cannot infer much, if anything, from the comparison of two daily sea ice maps 33 years apart," the Copernicus spokesperson said of the Facebook post. "Changes in our climate can only be assessed based on long continuous time series."

When measuring sea ice trends, scientists also focus on particular times of the year when the change is most noticeable. They say the extent of the ice is generally largest in March and smallest in September.

"Why show just one day in May, not the average over all of September - which is the time of year we are most concerned about?" she said. "OK, let's assume that's because it's the latest data released. But why compare with 1989, not 1979, the start of the record?" 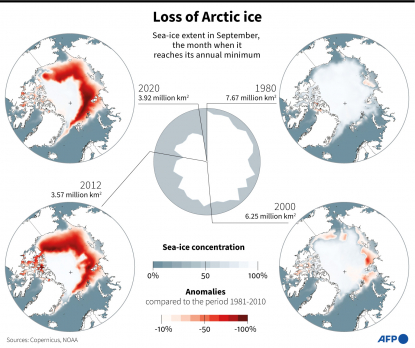 Scientists closely monitor the volume of ice -- not just its geographical spread.

"The decline in sea ice is even more remarkable when we look at the total volume of ice. i.e. accounting for not just its area but also its thickness," said Michel Tsamados, a sea ice specialist at University College London, in an email to AFP. "Models and observations concur also to show that the volume of ice has decreased by an even larger percentage."

A study citing data from the University of Washington's Pan-Arctic Ice Ocean Modeling and Assimilation System mapped a dramatic decline in the thickness of April sea ice in the Arctic.

The study found the ice declined from more than three meters to about two meters from 1979 to 2018. Tsamados said satellite data confirmed the model. 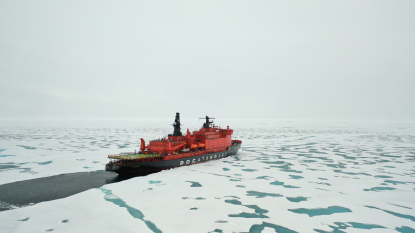 A Russian nuclear-powered icebreaker at the North Pole on August 18, 2021 ( AFP / Ekaterina ANISIMOVA)

There is another aspect of sea ice not covered by the image in the Facebook post, the Copernicus spokesperson said in an email.

"Long-term sea ice changes are not limited to changes in sea ice concentration or extent," the spokesperson said. "These changes have also affected the type of sea ice, with a marked decline in the area covered with multi-year ice, i.e. ice that has survived several melt seasons."

The trend is illustrated by data graphics on Copernicus's website.

Tsamados said: "Comparing a single day's sea ice extent 40 or so years apart is a bit like comparing the weather in France on May 13th in 2022 and 1979. Nobody does this, as of course, at daily timescales, variability is large and can hide the general trend."

AFP has previously debunked other inaccurate claims about Arctic ice and climate-related topics.