Skip to main content
A polar bear is seen in Essen Bay off the coast of Prince George Land, an island in the Arctic, on August 22, 2021 ( AFP / Ekaterina Anisimova)

An online article uses a scientific study comparing past and present Arctic ice levels to downplay the significance of glaciers melting due to climate change. This is misleading; the study's lead author says the causes of current and past ice loss differ and that the article misinterprets the research, which uses historical data to forecast the eventual disappearance of Arctic glaciers.

"New Study: Arctic Was Much Warmer 6000 Years Ago… 90% Of Glaciers, Ice Caps Smaller Than Present Or Absent!" says the headline of an April 11, 2022 article on Watts Up with That?, a website that features content describing the idea that humans are causing global warming as a lie, and saying climate science is being misrepresented and exaggerated to cause panic.

"Climate alarmists hate this inconvenient fact: hundreds of temperature reconstructions show that the northern hemisphere was much warmer over much of the past 10,000 years (Holocene) than it is today," the article says.

It refers to a graphic in a March study on Arctic ice caps, saying: "We see that the Arctic region glaciers were much smaller 6000 years ago than today. Many in fact disappeared altogether and so summers were warmer." 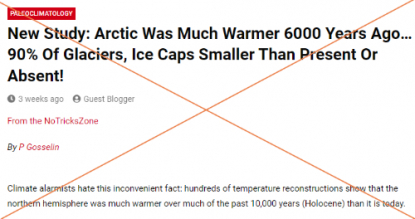 A screenshot taken on May 5, 2022 shows an article on the Watts Up With That website

The article has been featured in various social media posts questioning the validity of the widely held scientific consensus that humans are responsible for potentially devastating climate change. One Facebook post said: "Global warming is Gobaloney!" Another claimed: "Here is the data. As usual the climate change alarmists are full of it. We are not warming. In fact the opposite. So, stick that in your igloo."

But the article misrepresents the findings presented in the study, which lead author Laura Larocca said aims to better understand the "rapid, and striking, recent retreat" of the Arctic glaciers "into a long-term context."

The article "completely misrepresents our study and takes information out of context to spread common fallacies," she told AFP. "Evidence of past periods of warmth from paleoclimate archives is not an 'inconvenient fact.'"

Larocca, a postdoctoral fellow at Northern Arizona University, said the notion that climate change today is not caused by humans because there have been periods of global warming in the past is incorrect.

Thousands of years ago, "summer warmth was driven by slow and predictable changes in Earth's orbit resulting in higher summer insolation (more solar radiation) in the Northern Hemisphere," she said, while "it is unequivocal that the burning of fossil fuels/human influence is driving current warming."

Larocca said the current and projected changes to Arctic glaciers and ice caps are even more striking when considered within a longer-term context. "Paleoclimate records tell us that during past periods of modest warmth, dramatic environmental change took place. This information provides a concerning glimpse at where we are headed as the Earth continues to warm," she said. 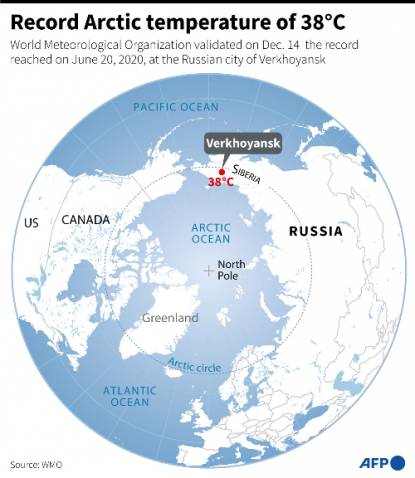 A map locating the Russian city of Verkhoyansk, in Siberia, where a new record high Arctic temperature of 38°C on June 20, 2020 was validated by the World Meteorological Organization ( AFP Graphics / )

The natural causes for historical climate change are well known among the scientific community, and climatologists today can measure all of these natural processes to be able to know if any of them are causing current warming, she said.

"Today's loss of glacier ice is occurring for different reasons than the loss that occurred 6,000 years ago. Unfortunately, that means that we cannot expect natural changes to shift us towards glacier stability or growth over coming centuries or millennia, not to mention the next decades," said the scientist, who specializes in ice dynamics and ice-ecosystem connections.

The melting of land-based glaciers and the melting of the Greenland and Antarctic ice sheets are contributing to global sea level rise, endangering coastal populations around the world.