A video viewed more than 250,000 times on Facebook appears to show a spokesman for India's ruling party wearing a T-shirt branding Prime Minister Narendra Modi a "thief". However, the image is doctored. Tajinder Pal Singh Bagga was in fact wearing a T-shirt with a slogan that praised Modi.

"Aajtak has been flashing this photo of Bagga. Look carefully what his Yellow t-shirt says, 'Mera PM Chor Hai'," reads a Facebook post from May 6.

The video, viewed more than 250,000 times, shows a broadcast from Hindi-language news channel Aaj Tak in which Tajinder Pal Singh Bagga, a spokesman for the ruling Bharataya Janata Party (BJP), appears to wear a yellow T-shirt with the slogan "Mera PM Chor Hai".

'Thief' is a common slur against Modi from critics who accuse him of corruption.

Branded the BJP's "controversial social media posterboy", Bagga has gained notoriety for attacks on opposition politicians online and offline. He was arrested on May 6 over accusations he made death threats to two leaders from the liberal Aam Aadmi Party. 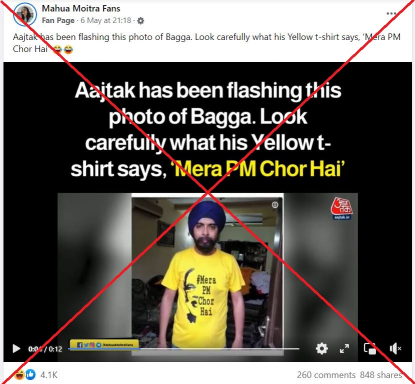 Aaj Tak broadcast the picture apparently showing Bagga wearing the controversial T-shirt in a report on his arrest on May 6.

Snippets and screenshots from the report quickly spread on Facebook and Twitter, where many people appeared to believe it showed a genuine photo.

"Oh God, the truth came out," one comment read, in an apparently ironic reference to Modi being called a 'thief'.

"It's not too late for Bagga to realise who the real thief is," another joked.

In the original photo, the slogan on the T-shirt reads: "My PM Works Until AM."

In the posts, Bagga said the T-shirt was from T-Shirt Bhaiya, a business venture he launched in 2017 selling pro-Modi and pro-BJP T-shirts.

A keyword search on the website found the T-shirt in the photo.

At the time, Aaj Tak -- which went on to broadcast the doctored photo in its May 2022 report --  published a fact-check showing the photo was fake.

Contacted by AFP, a representative for Aaj Tak's English-language counterpart India Today said the doctored image was used in error in the May 2022 report.

Balakrishna, senior editor of the fact-checking department of India Today, said that it appeared the channel "picked up a random image of Bagga without looking carefully into what's written on it".