An image appearing to show an illustration of Russian President Vladimir Putin with Pakistan's ousted leader Imran Khan on the back of a truck has been shared thousands of times in social media posts that claim it was taken in Russia. However, the photo has been altered to add the illustration to the truck, and it was originally taken in the United States.

It appears to show a white truck stuck in traffic that features an illustration of Putin with former prime minister Khan on the back.

"Scenes from a road in Moscow in Russia," reads the tweet's Urdu-language caption.

It has been retweeted more than 4,000 times.

The day Russia invaded Ukraine, Khan was in Moscow meeting the Russian leader in what was widely considered an ill-timed visit, AFP reported.

Just over one month later, Khan was removed from office following a no-confidence vote. 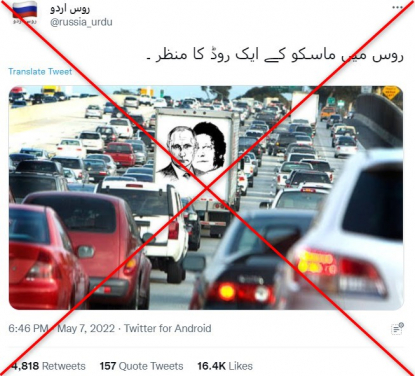 It was also shared in misleading posts on Facebook here, here, and here.

Some social media users appeared to believe the image shows a genuine illustration of Khan and Putin on a truck in Russia.

"Well done Russia keep it up God bless your country," one user wrote in English.

Another thanked Russia saying, "We Pakistanis also love Putin as much as you love our Khan".

However, the image has been doctored to add the illustration of the two leaders.

The truck does not feature an illustration of Putin or Khan.

"A traffic jam on a California freeway," reads the photo's description.

Below is a screenshot comparing the doctored image (left) with the original image from Getty (right):

A yellow road sign on the right-hand side of the image reads in English: "TRAFFIC MERGE LEFT".

The style of the sign matches those commonly used in the United States as seen here.

The unaltered image was also included in a 2021 news report by British broadcaster the BBC, also credited to Getty.

AFP has debunked a wave of misinformation following Khan's removal from office.