Skip to main content
Poll workers prepare ballots at a polling precinct during the presidential election in Quezon City, suburban Manila on May 9, 2022. ( AFP / Ted ALJIBE)

People wearing masks formed long queues before dawn on May 9 to cast their votes for president and national and local officials when polling stations opened across the archipelago, AFP reported.

One set of screenshots appears to show a resolution granting a disqualification petition filed by "Angela O. Aguilar" against senatorial candidate Neri Colmenares and five parties vying for seats in Congress.

The screenshots say Colmenares and five party-list groups -- BAYAN MUNA, Anakpawis, Kabataan, ACT Teachers and Gabriela Women's Party -- were "involved in the funding" of a communist rebel group and were disqualified from running for office.

In the Philippines, the party-list system seeks to give citizens from marginalised groups representation in Congress.

It purportedly states in part: "COMELEC DISQUALIFIES MAKABAYAN BLOC AND NERI COLMENARES FROM THE MAY 2022 ELECTIONS".

The post's Tagalog-language caption similarly claims that the candidates were disqualified for alleged communist links. 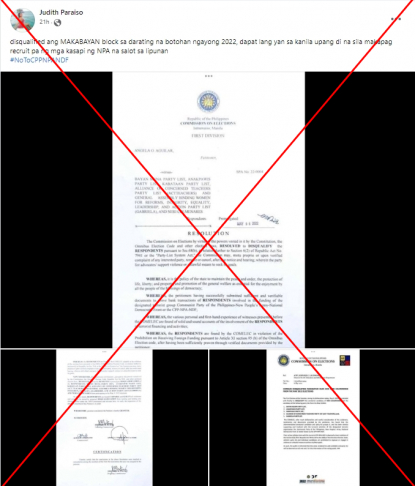 Screenshot of the fabricated documents. Taken May 9, 2022.

But the purported documents shared in the posts are "fake", according to Comelec.

In response to the misleading posts, Comelec spokesman Laudiangco said in a press briefing on May 8: "I was in contact with the commissioners who supposedly signed the resolution... and this document circulating regarding some party-list and senatorial candidate is fake and spurious."

Laudiangco also said he did not issue the press release shared in the misleading posts.

His comments can be heard from the 12-minute 39-second mark of this video streamed live on Comelec's official Facebook channel.

AFP conducted multiple keyword searches on Comelec's official online channels and did not find any record of the alleged disqualifications.

AFP analysed the two-page document circulating online and found it was lacking in detail on the legal basis for the disqualification decision.

Further keyword searches found the misleading document's format was inconsistent with a genuine Comelec ruling on a disqualification case.

A copy of a genuine 31-page ruling that dismissed a disqualification case filed against presidential frontrunner Ferdinand Marcos Jr was published online here by CNN Philippines on April 20, 2022.

It describes in detail the facts of the disqualification case and the legal basis for the decision.

Below is a screenshot comparison of the purported document in the false posts (left) and a genuine Comelec ruling document (right): 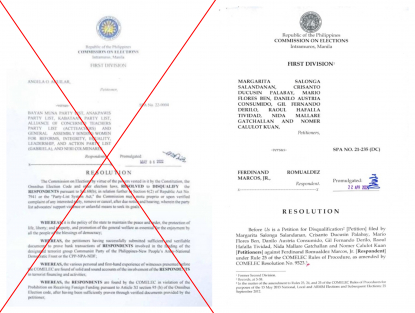 Google keyword searches also found old reports that stated "Angela O. Aguilar" sought to disqualify Colmenares and the five parties when they ran for office in 2019.

But her petition was dismissed in 2020, according to several Philippine news reports published here, here, and here.

Similar false disqualification claims circulated in the 2019 elections and were debunked by AFP here.