Skip to main content
Indian journalist and author, Rana Ayyub speaks at the launch of her book 'Gujarat Files' on May 27, 2016 in New Delhi ( AFP / CHANDAN KHANNA)

A Muslim Indian journalist has been criticised online after she was purportedly quoted in a tweet by an Indian news channel as defending "child rapists".  However, the purported tweet, which has circulated online since at least 2018, is from an imposter account for Republic TV. The news channel said it had never posted the message on its social media, and AFP found no evidence it was published online. Journalist Rana Ayyub -- a fierce critic of Indian Prime Minister Narendra Modi's Hindu nationalist government -- previously refuted the claim in 2019 after similar posts circulated online.

The screenshot appears to show a tweet from April 23, 2022 from Republic TV that reads: "Minor child rapists are also human, do they have no human rights.

The screenshot features a photo of Ayyub, who says she has been a victim of relentless harassment by far-right Hindu groups -- including rape threats-- because of her reporting on issues including the marginalisation of India's minority Muslims, AFP reported. 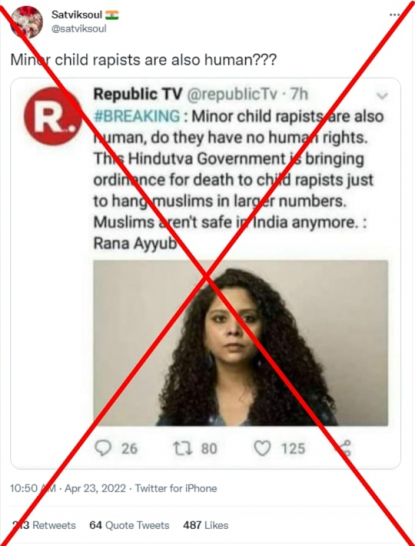 A screenshot of the misleading tweet captured on April 29, 2022

AFP found the screenshot has circulated online since at least 2018.

The posts prompted condemnation of Ayyub by some users.

"I hope she realises what she has said," one post read.

"People like her create division. The criminals do not have religion. They should be prosecuted. Feeling shame on her statement," another person commented.

However, the posts do not show a genuine tweet from Republic TV.

The handle @RepubIicTV has been suspended, while a similar handle @republictv is a live account that belongs to a now-defunct TV production company based in Scotland.

A Republic TV spokesperson said the channel never reported the comments shared in the tweet.

Republic Media Network or any of its affiliates do not in any way associate, or endorse any post by the handle "@republicTV," they added.

Ayyub previously denied she had ever made the comments in 2019.

"This fake photo-shopped tweet that shows me advocating child rapists in the name of Islam is being circulated yet again all over social media," she tweeted on June 11, 2019 alongside a screenshot of the post.

This fake photo-shopped tweet that shows me advocating child rapists in the name of Islam is being circulated yet again all over social media. From the likes of Ashok Pandit to the entire right wing eco system is sharing this tweet. How sick are you guys ! pic.twitter.com/Q9A6BbGnh8

AFP could not find any posts or comments online made by the journalist that correspond with the claim in the misleading posts.