As Sri Lankan President Gotabaya Rajapaksa faced calls to resign over a crippling economic crisis, Facebook posts shared a photo of a message telling the leader to "go home" that they claim was beamed into the sky over the capital Colombo. However, the image was doctored from a photo of an art installation that was unveiled in Australia in 2005.

"Look up at the sky in Galle Face now. Gota, you messed with the wrong generation," reads a Sinhala-language Facebook post shared on April 18.

Gota is a nickname for Sri Lanka's president, who is facing calls to resign over the island's most painful economic downturn since independence in 1948.

Mass demonstrations have swept the country over severe shortages of essential goods and regular blackouts. Police shot dead one man on April 19 in the first fatal clash with protesters.

The Galle Face Green is a park near the presidential office in Colombo. Hundreds of people have occupied a nearby plot of land since April 9 that they have dubbed Gotagogama, which translates as Gota Go Village.

The Facebook post appears to show a photo of a beam of light projected into the sky reading "#GOHOMEGOTA". 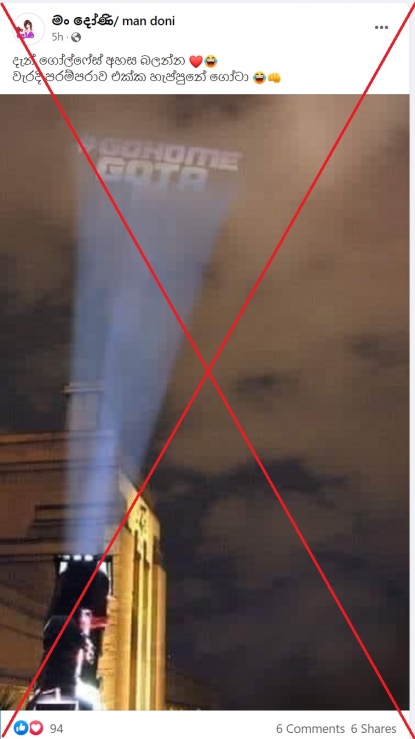 The same picture was shared in similar Facebook posts more than 1,000 times in total here, here and here.

"The sky's the limit for this generation. Too bad I wasn't at Galle Face today," said another.

Meanwhile, an image of the same beam apparently projecting a message in support of the president circulated on Facebook here, here and here.

However, while protesters have genuinely projected messages about Rajapaksa on buildings in Colombo, the images shared on Facebook have been doctored.

A reverse image search of the picture led to an article from 2008 by Artlink magazine, which shows a photo of the beam with text reading "Beware of the God".

The article said the projection was part of an eponymous art installation by Deborah Kelly that was unveiled in Sydney, Australia in September 2005.

Screenshot of the Artlink article captured on April 18, 2022

Below is a screenshot comparison of the doctored images (left, centre) and the original photo (right).

Kelly posted a video of the projection on her website, which said the installation was part of a wider project "regarding the impacts and aspirations of religious literalists in the public sphere".

An AFP journalist at Gotagogama on April 18 said there was no cloud projection that evening.

AFP has debunked other false and misleading claims about the Sri Lankan crisis here, here and here.