Skip to main content
People clash with riot police as they demonstrate outside the Sri Lankan president's home demanding his resignation amid an unprecedented economic crisis in Colombo, on March 31, 2022. ( AFP / ISHARA S. KODIKARA)

After Sri Lankan police used tear gas and water cannons to disperse hundreds of demonstrators who attempted to storm the president's home, social media posts claimed one protester who was filmed confronting police had later died from "bad injuries". However, the lawyer representing the protester pictured in the posts told AFP on April 5, 2022 that her client was "alive and well". A hospital administrator said protesters who were treated following the protest have either been discharged or were recovering well as of April 4.

The post includes an image of a Sri Lankan protester holding his left arm in the air as he confronts a line of police officers.

The text reads in part: "I am saddened to hear the news about a True Hero who spoke on behalf of all of us and addressed the cops in Mirihana. He passed away this morning due to bad injuries."

Police dispersed the protesters -- who were demanding the president's resignation -- using tear gas and water cannons. 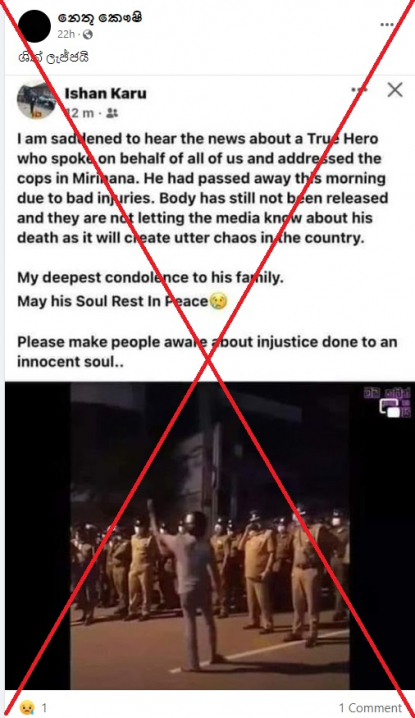 The text in the purported screenshot goes on to say: "Body has still not been released and they are not letting the media know about his death as it will create utter chaos in the country."

Claims the protester died were also shared elsewhere on Facebook, here, and here.

The image in the misleading posts corresponds with a Facebook video published on April 1, 2022 in which a protester can be seen urging a group of Sri Lankan police officers not to harm demonstrators.

The Sinhala-language text overlaid on the video translates as: "The emotional speech made by a young man in front of top police officers in Mirihana, for the entire country to hear". 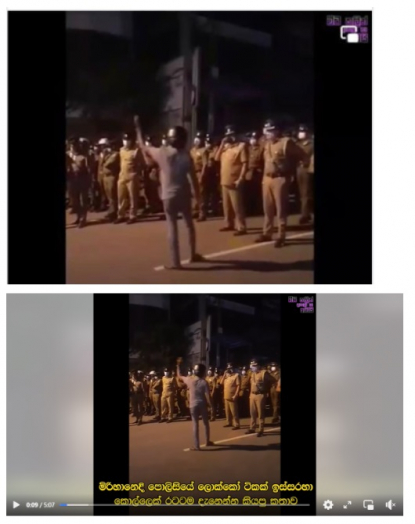 In the five-minute video, the police officers stand silently while the protester berates them.

The protester can be heard saying: "You [police officers] have taken an oath to protect this country, but where is the protection? Protect us, that is all we are asking you to do.

"We have come together here today as Sri Lankans -- the Sinhalese, Tamils, Muslims, we are all here as one nation. You all [the police officer] have taken an oath to protect this country, but where is the protection? Protect us, that is all we are asking you to do."

At the end of the clip, the protester walks away as other bystanders applaud him.

He said the Facebook video was captured in the early hours of April 1 near President Rajapaksa's private residence.

In response to the misleading posts, the protester's lawyer, Dilrukshi Dias Wickramasinghe, said the claim that he had died following the confrontation was "completely false".

"He is alive and well. I appeared on behalf of him today," she told AFP.

Rukshan Bellana, the deputy director of the Colombo South Teaching Hospital, told AFP on April 4 that "None of the protestors hospitalised were or are in a critical condition."

"Most have been discharged and the others remaining are recovering well," he said.