An image of Nigeria's Vice President Yemi Osinbajo holding a fuel pump nozzle has been circulating in social media posts claiming that the politician, whose ambition is to succeed President Muhammadu Buhari next year, was photographed dispensing fuel at a petrol station in the country’s commercial centre Lagos while campaigning. However, the claim has been shared in a misleading context: while the photo indeed captures Osinbajo working a pump at a petrol station, it was taken during the 2017 fuel crisis.

One of the earliest versions of the claim was published on Twitter on April 13, 2022, two days after Osinbajo formally declared his intention to run for president in 2023. 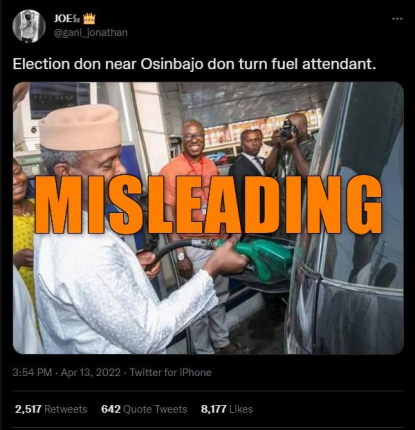 Social media monitoring tool CrowdTangle shows the claim also emerged on Facebook and Instagram just after Osinbajo announced he would be running for president.

However, the photo was taken at an event unrelated to Osinbajo’s recent campaigning.

A reverse image search led to several online publications, mostly dating back to December 2017 when Osinbajo visited Nigeria’s megacity Lagos to monitor fuel supplies at petrol stations and fuel depots amid shortages at the time.

AFP had reported how fuel shortages were crippling Nigeria’s economy, causing long queues at petrol stations with motorists sometimes waiting up to 24 hours to fill up their tanks.

“Vice President Yemi Osinbajo dispensing petrol to the admiration of motorists and officials at a filling station in Lagos, on Sunday, December 24, 2017,” reads the caption on the photo accompanying a report by Nigerian daily newspaper Tribune about Osinbajo’s visit to Lagos. 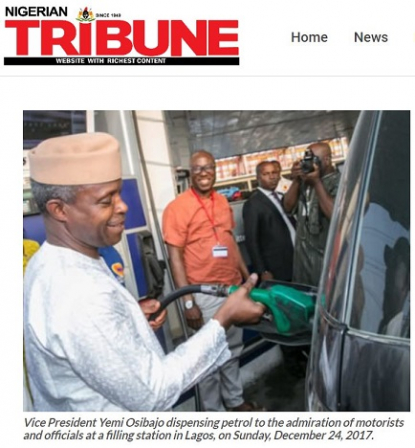 Screenshot taken on April 19, 2022, showing the image on Tribune

Further checks also found the exact image on Osinbajo’s website with a caption confirming it was taken in Lagos on Christmas eve in 2017.

As Nigeria prepares for its 2023 general elections, some Nigerians have accused politicians of false displays of humility and kindness.

Osinbajo, a member of the ruling All Progressives Congress, will face a difficult battle at the primary against several prominent politicians from the party, including former Lagos state governor Bola Tinubu. Nigerian daily newspaaper The Punch reported that supporters of Osinbajo and Tinubu have already started trading barbs.