Image has circulated in reports since 2020 about fuel queues in Sudan, not Myanmar

An image has been shared hundreds of times alongside a claim that it shows a long line of vehicles queuing at a petrol station in coup-hit Myanmar's largest city Yangon after local media reported on concerns about a domestic fuel shortage in April 2022. But the image has been shared in a false context: it has circulated in reports since 2020 about fuel shortages in Sudan.

It has been shared more than 450 times. 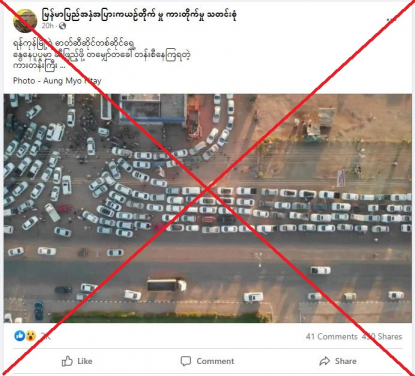 A screenshot of the misleading post taken on April 19, 2022.

The post's Burmese-language caption translates to English as: "A long line of cars queuing up in front of a gas station in Yangon to refuel in the hot sun. Photo: Aung Myo Htay".

Myanmar has been in turmoil since a military coup against the civilian government in 2021.

The country experienced crippling fuel shortages in the months following the coup, and AFP reported in May 2021 that the junta was stepping up security to protect supply lines.

The image circulated online after local media reported on long lines forming at petrol stations in Yangon in April 2022, with Burmese-language reports saying there were concerns about fuel shortages.

The junta has denied suggestions of a shortage. In a statement published by the state-owned newspaper The Global Light of Myanmar, it said: "Currently, the amount of fuel oil is more sufficient than that of the previous situation."

The image was also shared alongside a similar claim in Facebook posts here, here and here.

A reverse image search on Bing found the photo was in fact taken from drone footage of massive queues at a petrol station in Sudan in April 2020.

A video of the drone footage was published here on April 23, 2020 by Ruptly, a subsidiary of the Russian state-owned television network RT.

According to the video's description, it was taken in Khartoum, the capital of Sudan, on April 21, 2020.

Below is a screenshot of the video on Ruptly's website. 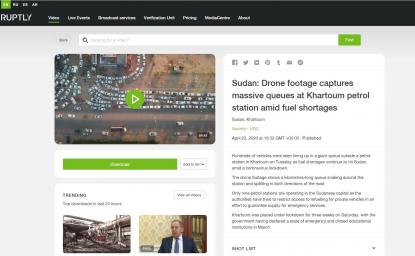 In March 2020, AFP reported there were long queues for fuel in Sudan after the economy sank into a deep crisis following the overthrow of longtime autocrat Omar al-Bashir in 2019.

The video was also published here on Facebook by RT on April 24, 2020.

The image shared in the misleading posts can be seen at the 24-second mark of the Facebook video.

Below is a screenshot comparison of the image in the false post (left) and the video on RT's Facebook page (right):

A screenshot comparison of the image from the false post (left) and the video on RT's Facebook page (right).

The image corresponds with this Nile Petroleum gas station seen on Google Maps in Khartoum.