A video of a Pakistani journalist crying at a rally has been viewed millions of times in April 2022 alongside a claim she became emotional after witnessing support for former Pakistan prime minister Imran Khan, who was ousted following a no-confidence vote. But the video has been shared in a false context. It shows a journalist at a rally of Khan's party supporters in the eastern Pakistani city of Lahore in 2014, several years before he became prime minister. Local media reported that the reporter became upset after she was harassed by a group of protesters.

The 31-second footage has been viewed more than 3.8 million times.

The post claims the video shows a journalist from Pakistani news channel Geo News becoming emotional while witnessing a rally in support of former prime minister Imran Khan, who was ousted from office on April 10, 2022.

The post's Urdu-language caption translates to English as: "This is a Geo News anchor.

"After seeing the love of supporters for their leader Imran Khan, she did not feel like doing false reporting under duress. Country comes before the job.” 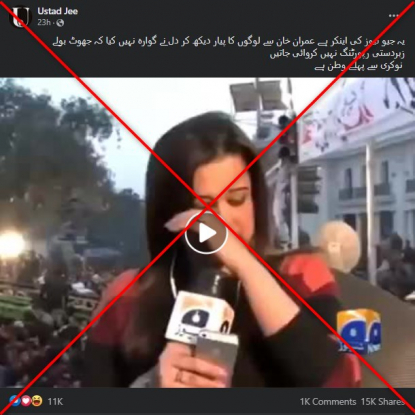 The same video has been viewed more than 23,500 times after it was also posted here, here, here, and here on Facebook alongside a similar claim.

A reverse image search on Google found a longer video that was previously published in a report by Geo News here on December 15, 2014.

The report states that Geo News journalist Sana Mirza -- whose name has also been spelled Sana Merza by local media -- broke down after being harassed by Khan's supporters in December 2014 in the eastern Pakistani city of Lahore.

"Sana Merza a seasoned Anchorperson was unable to hold back her tears when she was repeatedly targeted with bottles and eventually broke down on live television when she was struck hard by one."

As reported by AFP, the rally on 15 December 2014 in Lahore was part of a series of anti-government protests staged by PTI's supporters after Khan claimed vote-rigging in the 2013 elections, which brought his rival, Nawaz Sharif, to power.

Khan was elected as prime minister in August 2018.

Below is a screenshot comparison of the video in the misleading post (left) and the Geo News footage (right):

In the original Geo News video, news anchor Hamid Mir can be heard saying: "Sana Mirza, it looks like [the protesters] threw a rock or hit you with something?"

Mirza replies: "Yes I was just hit by a water bottle. There were three or four attempts previously but they couldn't hit [me] and the camera didn't catch them.

"This one did hit [me] and it obviously did hurt but I will try to say what I want to convey properly".

The harassment attack on Mirza was also reported by Pakistani newspaper Dawn here.

In a December 2014 statement, the Pakistan Press Foundation said: "PTI workers hurled bottles and harassed reporter Sana Mirza, who is also Joint Secretary of the Karachi Union of Journalists (KUJ), and shouted hostile slogans to the point where she was unable to hold back her tears."

The statement also said the incident in Lahore was the latest attacks by PTI supporters on Geo News journalists.