Social media posts shared multiple times claim a bar in Jerusalem called "Putin Pub" was renamed "Zelenskiy Pub" -- using an alternative spelling of Ukraine President Volodymyr Zelensky's surname -- following Russia's invasion of Ukraine in late-February 2022. However, the image shared alongside the posts was doctored to add the Ukrainian president's surname in place of where the Russian president's surname had been. One of the bar's operators told AFP on March 9 they had taken down the sign that said "Putin". On March 10, the bar was renamed "Generation Pub".

"A bar in Jerusalem has changed its name, it used to be called 'Putin', now it's called 'Zelensky'," reads a simplified-Chinese Weibo post, published on March 7, 2022.

The post circulated in the days after Russian President Vladimir Putin launched a globally condemned invasion of Ukraine in late-February 2022. The invasion has prompted worldwide protests, economic sanctions and an exodus of foreign companies from Russia.

Businesses have also taken steps to change, remove or rename items that could be associated with Russia or Putin.

The image in the post appears to show a sign above a doorway that reads "Zelenskiy Pub", supposedly in honour of Ukrainian President Volodymyr Zelensky.

A screenshot of the misleading post taken on March 22, 2022.

Keyword searches on Google found that there is a bar which used to be called "Putin Pub" in Jerusalem, and images on Facebook and Google show a similar doorway with the "Putin Pub" sign and matching building facade.

However, the image that shows the "Zelenskiy" sign has been doctored.

On March 7, the bar posted a statement on its Facebook page denying it would be renamed "Zelenskiy".

The Russian-language statement reads in part: "We ask you all to ignore the false news that the bar will now bear the name Zelensky. This is not true and was sneakily carried out by inexperienced photoshoppers."

One of the bar's operators, Yulia Kaplan, told AFP on March 9 that the bar had removed the original sign but had not yet decided on a new name.

Israeli news site Mynet also posted about the bar removing the name "Putin" on Twitter on February 26, with accompanying photos showing the doorway before and after the sign had been removed.

The large "Putin" sign had been the bar's trademark for the past 15 years, the Times of Israel newspaper noted in a report about the bar, which it said was popular with Jerusalem's Russian-speaking community and tourists.

The bar has since been renamed "Generation Pub", according to an announcement on its Facebook page published on March 10.

The change from "Putin Pub" to "Generation Pub" is also recorded in the Facebook page's "page transparency" section: 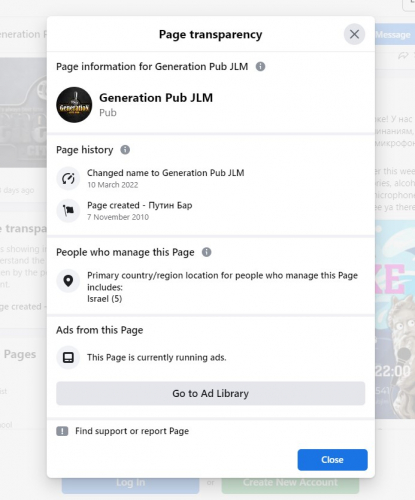 A screenshot of the Facebook page's "page transparency" section, captured on April 22, 2022.

The bar's Google Maps listing has also been updated with the new name.