Footage has circulated since 2019 in Russian plane accident reports, does not show 'UAE airport fire'

A video has been viewed thousands of times in multiple Facebook posts alongside a claim that an Emirates airlines passenger plane caught fire at Sharjah International Airport in the United Arab Emirates. This is false; the clip has circulated in reports since 2019 about a Russian passenger plane catching fire during an emergency landing at an airport in Moscow. AFP found no official reports that an Emirates plane caught fire at Sharjah airport as of April 22, 2022.

The post's Bengali-language caption translates as: "The 521 Emirate airlines flight from Pakistan crashed as the landing gear got blocked while landing at Sharjah Airport, killing 178 of the 206 passengers.

"Although 38 people survived, their condition is serious." 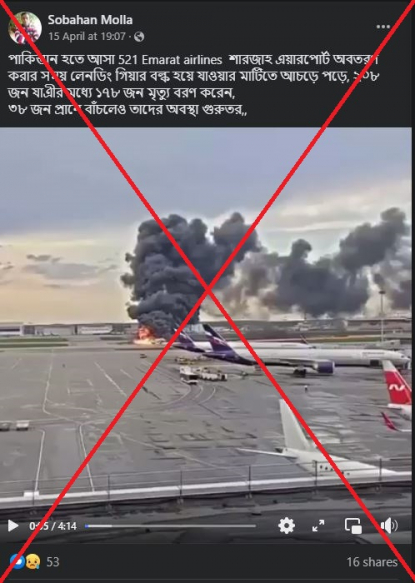 The four-minute 14-second video shows flames erupting from a plane at an airport, as passengers escape down an emergency slide.

The same video was viewed thousands of times after being shared here and here on Facebook alongside a similar claim.

AFP found no official reports about a fire on an Emirates plane at Sharjah airport as of April 22, 2022.

A reverse image search using keyframes extracted from the misleading video found a similar video on YouTube published on November 8, 2021.

The video's description reads: "41 people died in an Aeroflot plane crash at Moscow's Sheremetyevo airport on May 05, 2019.

"The Aeroflot Aeroflot Sukhoi Superjet 100 was on route to the northern city of Murmansk when the pilot reported technical problems and turned back.

"The plane caught fire during the emergency landing."

A closer analysis of the video found that the plane displays the Aeroflot logo, as shown in the screenshot below: 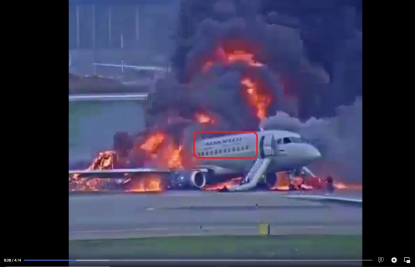 AFP reported on the disaster at Moscow's busiest airport here on May 6, 2019.

This AFP graphic shows the plane's final moments as it crash-landed at Sheremetyevo International Airport.

AFP graphic showing the final moments of SU-1492 as it crash-landed at Sheremetyevo international airport in Moscow@AFPgraphicspic.twitter.com/XSXnBMhWm4

AFP published another similar video of the same incident on YouTube on May 6, 2019.