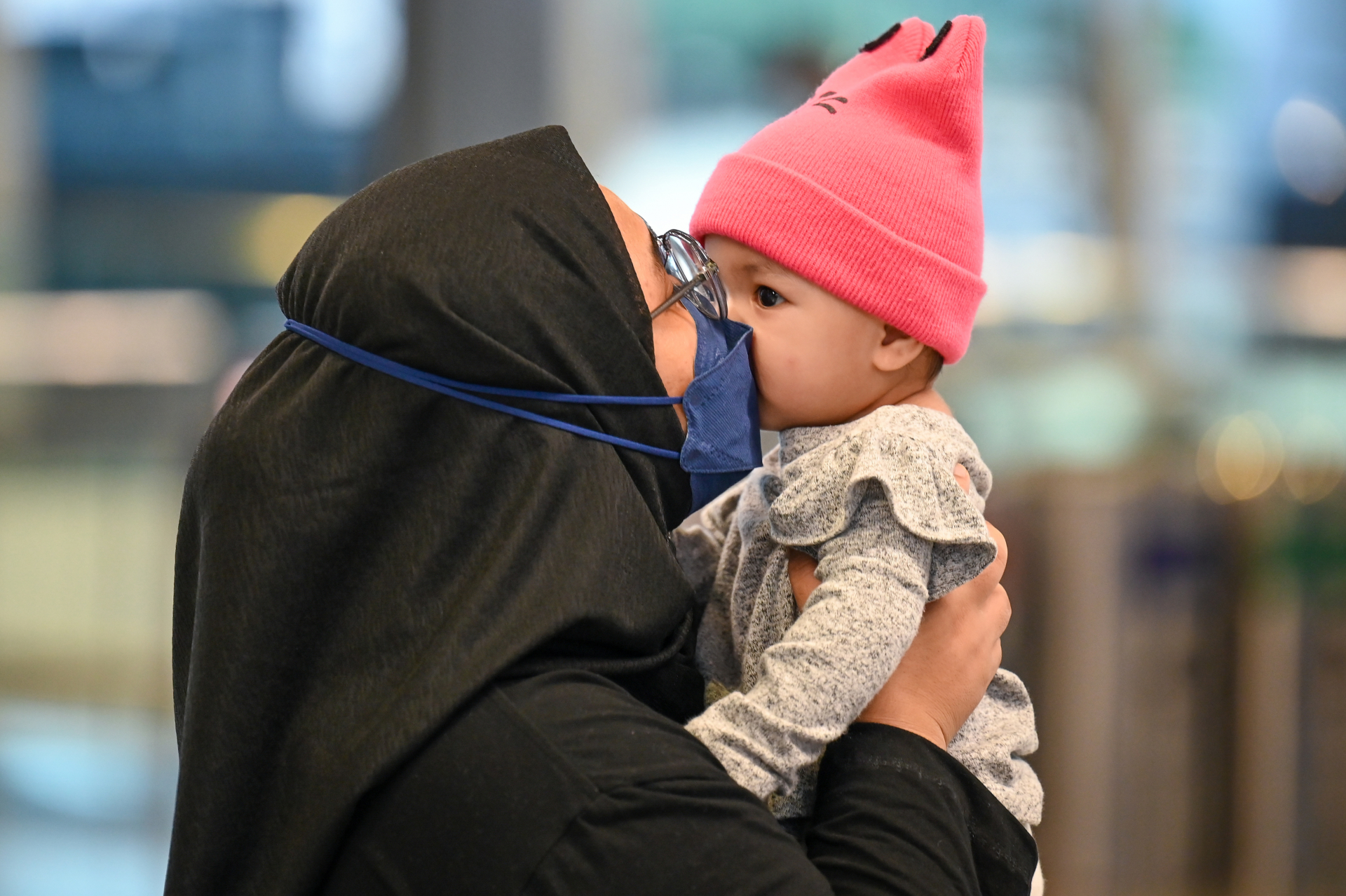 An infographic has been shared multiple times in social media posts that claim Malaysians must wear face masks with official government certification or face a fine of up to 100,000 Malaysian ringgit ($23,600) under new regulations. However, the claim is misleading; the new rules and penalties apply to companies and individuals producing or importing face masks, rather than the general public, Malaysia's Ministry of Domestic Trade and Consumer Affairs said.

The infographic about the purported new rules was shared here on Facebook on April 7, 2022.

"Does the granting of SIRIM approval for face masks prevent the Covid-19 virus from penetrating [the mask]/prevent it from spreading...?" 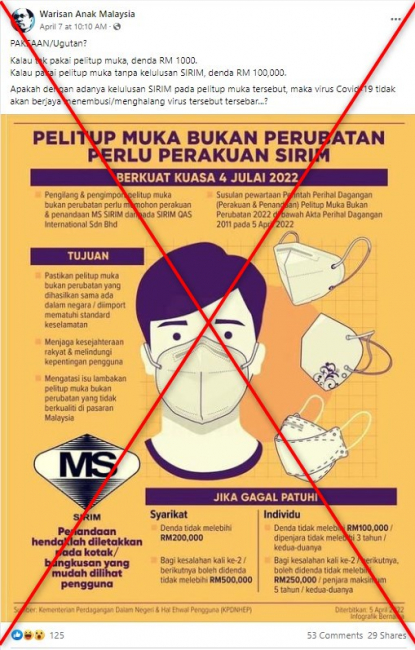 The accompanying infographic has a Malaysian-language title that reads: "Non-Medical Face Masks Must Have SIRIM Certification."

A column listed under the subtitle "Failure to comply" reads: "Individuals: Can be fined up to 100,000 Malaysian ringgit / imprisonment not exceeding 3 years / both."

Malaysia first implemented its mask mandate to prevent the spread of Covid-19 on August 1, 2020, and it remains in place even as the country begins its transition to endemicity.

Those who flaunt the mask rule face a fine of 1,000 Malaysian ringgit.

However, Malaysian authorities have come under fire for the high price of the penalty while government officials openly flaunted social distancing rules.

Malaysians rallied around a teen caught crying on video in August 2020 as he was fined 1,000 Malaysian ringgit for pulling down his mask at a train station, while lambasting local politicians for buying banana fritters without a mask and breaching social distancing measures to hold birthday parties.

The infographic was shared with a similar claim on Facebook here, here and here; and on Twitter here.

Comments on the posts indicated that some social media users were misled.

The Malaysian-language comments read: "The government educates people by fining them hundreds of thousands (of ringgit) rather than by trying to win the hearts of the people."

"It's been 3 years since we were hit by Covid but only now are they thinking about this. Nonsense work," another said.

The original infographic was posted by Malaysian state news agency Bernama on their Facebook page on April 6, 2022.

According to new regulations issued by the Ministry of Domestic Trade and Consumer Affairs on April 5, 2022, manufacturers and importers of non-medical face masks are required to obtain official certification from the government quality control body SIRIM, starting from July 4, 2022.

A section of the statement lists penalties for "companies" and "individuals" if they fail to obtain certification.

Not targeting the public

He also referred AFP to this graphic uploaded to the ministry's official Facebook page on April 11, 2022, titled: "Members of the public don't panic!"

A highlighted section of Malaysian-language text reads: "'Individuals' who will face enforcement action are not individual users / wearers of face masks but it refers to an individual who manufactures and imports non-medical face mask without SIRIM certification."

According to the graphic, the new requirement has since been postponed to January 1, 2023.

Bernama updated their infographics, in both English and Malaysian, and posted the updated versions on their Facebook page here and here on April 7, 2022.

Comparisons of the old Bernama infographics (left) and the updated infographics (right), with the main differences marked by AFP: 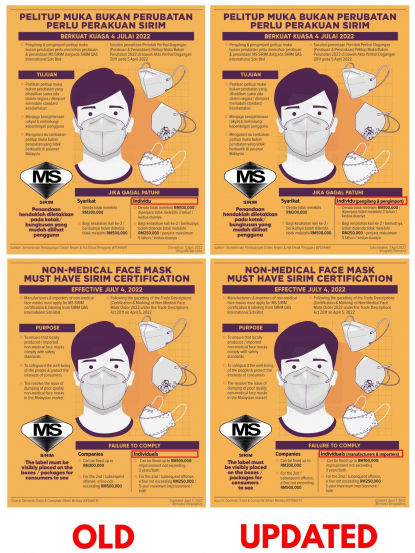