Video shows protest outside Indonesian parliament in 2019 to reject several laws, not in 2022

A video has been viewed hundreds of thousands of times in Facebook and TikTok posts that claim it shows chaos at a protest against rumoured plans to extend the presidential term limit, which was held outside the Indonesian parliament building in Jakarta on April 11, 2022. The claim is false; the footage shows a demonstration in the same location back in September 2019.

"Today's protests, April 11, 2022, at the House of Representatives is chaotic," reads an Indonesian-language Facebook post shared on that same day.

It had been viewed more than 400,000 times before it was deleted.

Indonesian police deployed tear gas and water cannon against thousands of students protesting against extending the presidential term limit on April 11, 2022, after rumours swirled about a potential change to the country's constitution.

The Southeast Asian country's next elections are scheduled to be held in 2024, and President Joko Widodo would not be eligible to run as Indonesia places a two-term limit on its leader.

But for weeks, senior ministers and several political parties had been suggesting the elections should be delayed and the constitution amended to allow presidents to serve more than two terms.

The same video has been watched more than 6,200 times after it was shared in similar posts on Facebook here, here and here; and on TikTok here and here.

A reverse image search on Yandex followed by keyword searches on YouTube found the same video was posted by CNN Indonesia on September 24, 2019.

AFP reported on the same day that demonstrators gathered outside the parliament in Jakarta to rally against a new criminal code bill that would, among other things, outlaw pre-marital sex and a new law that could weaken the country's anti-graft agency.

Protesters covered their faces and scattered in all directions as police fired tear gas and water cannon, and chaos erupted in the centre of the sprawling capital.

Below are screenshot comparisons between the clip in the misleading post (L) and CNN Indonesia's video (R): 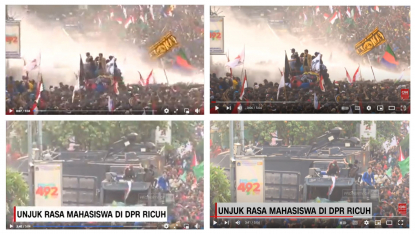