The photos were shared here on Facebook on April 6, 2022.

The Bengali-language caption translates to English as: "Mehedi Hasan Sagar, a ninth-grade student of Sharsha Government Model Pilot Secondary School, Jessore, has been injured in the beating by teacher Shahidul Islam.

"Mehedi is a student of the humanities section and he is 15."

The posts show a boy with the lower part of his body exposed and covered in scars. 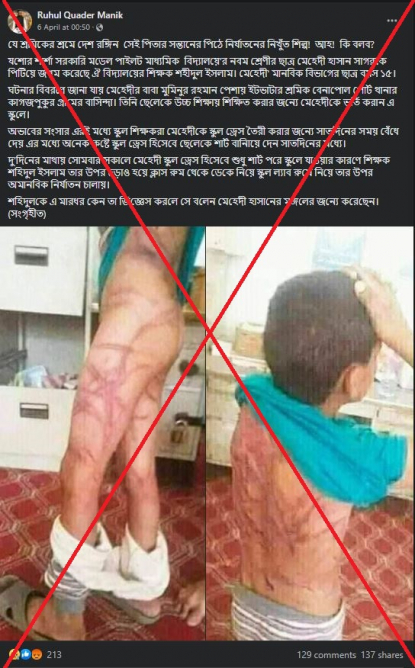 A Bangladeshi secondary school student was beaten up by his school headmaster for not wearing his school uniform in the southwestern district of Jessore in 2019, according to local media.

However, AFP found no official reports about any such incident in April 2022.

The photos were shared here and here on Facebook alongside a similar claim.

The images have in fact been shared in a false context.

A reverse image search found the first photo has circulated since October 2020 in reports about a boy who was assaulted by his father in the Yemeni city of  Al-Mahwit.

The photo was published on an Arabic-language Yemeni news website here on October 5, 2020.

"The police in Al-Mahwit Governorate have arrested a 40-year-old man named Rashid Muhammad Al-Qahili for torturing his 14-year-old son," the report reads in part.

Below is a screenshot comparison of the photo shared in the misleading posts (L) and the photo published in the Yemeni news report (R): 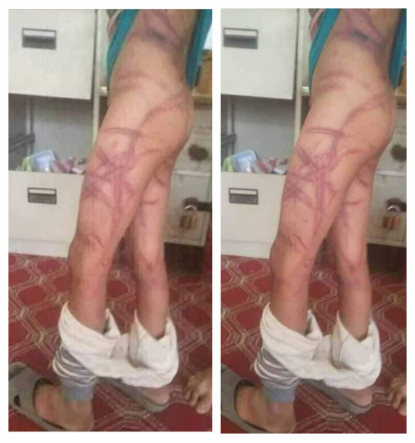 A further search found the same photo was also shared on Facebook here by a local activist on October 6, 2020.

The post claims the boy was "beaten and brutally abused by his father".

The other photo in the misleading posts appeared in this report on the Yemeni online news portal Cratersky on October 4, 2020 about the same incident.

The Arabic-language headline translates to English as: "A child was severely beaten by his father in Mahwit."

Below is a screenshot comparison of the photo shared in the misleading posts (L) and the photo published on Cratersky (R): 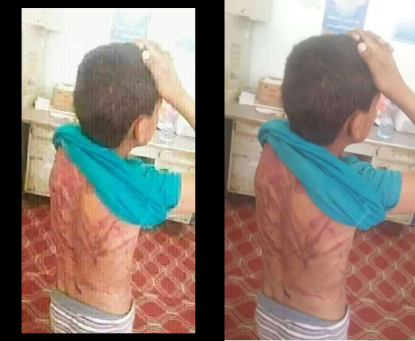 In an Arabic-language statement seen here, the Yemeni government said the father was arrested two days after the incident.

One of the photos was previously shared in posts alongside another false claim which AFP debunked here.