Social media posts say gasoline prices in the United States are vastly higher than in other major oil-producing countries, with some blaming the difference on President Joe Biden, politicians in general, or the "deep state." But prices vary widely around the world due to factors such as taxes, and experts pointed to national subsidies in many countries on the list as a reason for the lower costs at the pump. 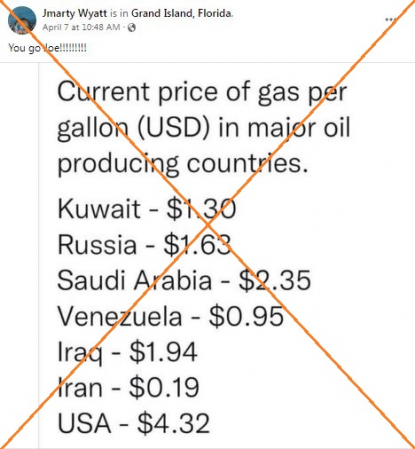 One Facebook post blamed "GREED AND POLITICIANS" for the difference, while another held the "deep state" responsible.

The United States is the world's largest oil producer, accounting for 20 percent of global output in 2020 or 18.6 million barrels per day (bpd) -- a figure that includes crude, other petroleum liquids and biofuels. It remained a net petroleum exporter in 2021, although trends showed a move toward growing imports.

Various factors caused US gasoline prices to rise prior to the Ukraine invasion, but Moscow's attack prompted crude prices to spike to almost $140 a barrel in early March. Later that month, Biden authorized a record release from US strategic oil reserves, leaving him almost no other levers for lowering oil prices.

The posts list the prices in several countries including the United States, which is by far the highest. While it is true that gasoline is cheaper in other places mentioned in the posts, prices around the world can change daily and vary widely. The list is not a representative sample of global prices and neglects to mention the reasons for variations in gasoline prices.

Ed Hirs, energy fellow in the Department of Economics at the University of Houston, told AFP that the list in the posts "means nothing."

"The primary challenge here -- with price compar(ing) retail gasoline prices -- is that many of these nations subsidize their citizens with cheap gasoline," said Hirs.

This means that money has to "come out of either the consumer pants pocket or the taxpayer tax pocket," he explained.

Mark Finley, fellow in energy and global oil at Rice University's Baker Institute for Public Policy, also said the list was only a selection of oil producers. "They also are countries that, if these prices are right, tend to subsidize consumers. It is not a real reflection of what gasoline actually costs," he said.

Finley said that the price of crude oil today costs about $2.40 a gallon, before the cost of transporting, refining it into gasoline and then getting it to a local station.

With today's price of crude oil at about $100 a barrel, he said that anything below about $2.40 is obscuring the price.

"What it means is that the prices that consumers in those countries are paying don't reflect the true cost of actually producing gasoline and getting it to their local stations," Finley said.

Critics often claim fuel prices would be lower if the United States opened up more domestic drilling, but crude prices are ultimately set on a global market.

Patrick De Haan, head of petroleum analysis at GasBuddy, was also skeptical of the list, saying: "Most of these countries offer(ed) gasoline subsidies or extremely low or no tax on gasoline."

In the United States,  pump prices include both federal gasoline taxes of 18.3 cents per gallon and state taxes that range from about 9 to 74 cents on gasoline and diesel. Taxes on gasoline are substantially higher in some other countries, especially in Europe.