Footage of a crowd walking briskly along a dusty field was published in a tweet that claims the video captures residents of border communities in Nigeria’s northern Niger state who recently fled their homes after attacks by bandits. However, the claim is false. The clip was filmed in 2021 when gunmen stormed the northern village of Solhan in Burkina Faso, massacring civilians and displacing residents.

The claim was published on the Twitter page of Nigerian online security news platform Eons Intelligence on April 3, 2022. Nearly 13,000 people viewed the video before the tweet was deleted.

“Another Video showing Residents fleeing their homes after bandits attacked the border Communities within Shiroro, Munya & Kafikoro LGAs 3 days ago (sic),” the tweet reads. “They are said to have converged at the Shiroro staff quarters to proceed to the IDP camps in Gwada and Zumba in Shiroro LGA.” 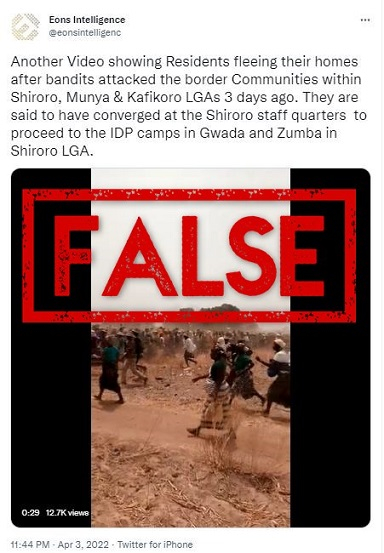 Shiroro, Munya, and Kafikoro are localities in Niger state, in central Nigeria. The region and neighbouring northwest zone have been plagued by heavily-armed criminal gangs, known locally as bandits, who raid villages, kill residents, carry out mass kidnappings for ransom and burn homes after looting them.

About 20 residents drowned on March 30, 2022, in a river in Niger state while fleeing bandits, Nigerian daily newspaper Punch reported.

But the video circulating on social media is from 2021 and is unrelated to recent attacks by gangs in Nigeria.

AFP Fact Check found that the video clip has repeatedly been used to spread misinformation in Africa, particularly in countries dealing with ethnic conflicts.

In December 2021, when clashes between fishing and herding communities in Cameroon’s Far North region killed two people, the 30-second video circulated in posts claiming to show residents of the country’s border community of Kousseri fleeing to Chad. 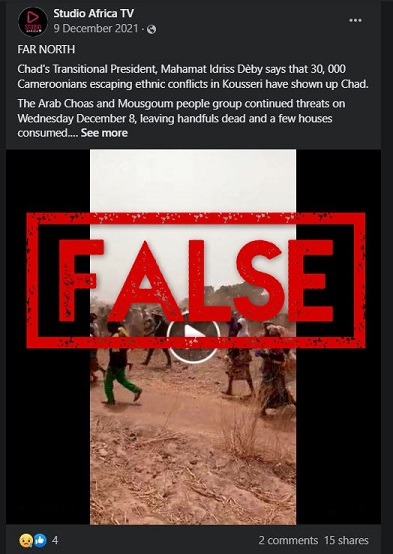 Using the video verification tool Invid WeVerify, AFP Fact Check ran a reverse image search on keyframes from the footage and found the same video was published on the Facebook page of SAIDA International e.V, a German-based charity organisation.

“On the run in their own country,” reads the headline of the German Facebook post translated to English. “As if the people in #Burkina Faso, one of the poorest countries in the world, did not have enough worries already, they now have to leave their belongings behind and flee from murderous gangs.”

The German post was published on June 8, 2021, the same day AFP reported that more than 7,000 families had fled Solhan, a village in northern Burkina Faso, following the bloodiest massacre in a six-year jihadist insurgency. The displaced residents travelled 15 kilometres (10 miles) from the scene of the attack to Sebba, the capital of Yagha province.

On the same day, Burkinabe online media Lobs Paalga also uploaded a longer version of the footage on YouTube.

An AFP journalist in Burkina Faso’s capital Ouagadougou confirmed that the language heard in the video makes it likely that it was filmed in the West African country.

“Calm down, don’t run,” says a voice speaking in Moore, the predominant language in large parts of Burkina Faso. Another voice says: “Do not follow the track, cross, continue.”

Moore is neither spoken in Nigeria nor Cameroon where the video was supposedly taken.

In addition, some people in the crowd can also be seen wearing conical-shaped traditional Sapone hats that have become a symbol of the Burkinabe culture. In fact, an identification label introduced to distinguish the traditional headpiece from others internationally can be seen on a wearer’s hat 21 seconds into the video. 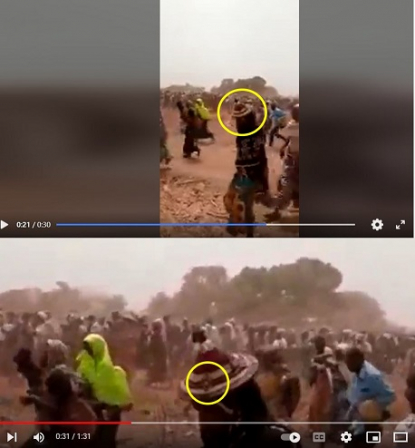 Screenshots showing the label on a traditional Burkina Faso hat

The label is also similar to one appearing in photos published on Facebook by Burkina Faso’s Ministry of Commerce, Industry and Crafts during an unveiling ceremony.

Meanwhile, Eons Intelligence removed the tweet and apologised for its error.

“Our Editorial boards attention has been called to this post done by members of our team earlier today based on initial info that suggest it to be that of the incident in Shiroro LGA, Niger State some 3 days ago (sic),” the apology reads. “In view of new info which suggest otherwise, we apologise.”