Skip to main content
A man holds a Sri Lankan flag as he gathers with protesters outside the Sri Lanka president's home in Colombo on March 31, 2022 to call for his resignation as the country's economic crisis worsened ( AFP / Ishara S. KODIKARA)


As Sri Lankans protesting the island's economic crisis clashed with security forces, a message circulating widely on Facebook and WhatsApp claimed that military law prevented soldiers from shooting at demonstrators holding the national flag because it would be a "war crime". However, Sri Lankan legal experts warned that there was no law to protect protesters carrying the flag.

"Please have the national flag with you when participating in all protests in Sri Lanka," reads a Sinhala-language Facebook post from April 3 shared more than 700 times.

"If possible, take a photo of it and keep it with you. The Sri Lankan military cannot shoot at you while you carry the national flag."

"According to the Army Act and the oath they have taken, it's tantamount to betraying the nation. Furthermore, as per national and international military law, it's a war crime. This is on behalf of the safety of all those committed to dissent." 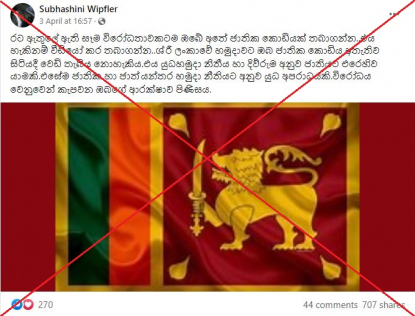 The post refers to "international military law", presumably meaning the Geneva Conventions, a set of rules ratified by 196 states that seek to reduce suffering in war.

Street protests have gripped Sri Lanka in recent weeks as demonstrators blocked main roads across the country over the worst economic crisis since independence from Britain in 1948.

Rajapaksa later declared a state of emergency, giving sweeping powers to security forces to arrest and detain suspects for long periods without trial.

"Very good and valuable advice. Sharing for everyone's use," one person commented.

"Bless you for educating us, will spread the news so all those protesting or who are planning to participate can follow this great advice," another wrote.

However, legal experts said the claim was false.

Sri Lankan attorney-at-law Prabodha Rathnayake said there was no regulation in national or military law that said security forces could not shoot at a person holding the national flag.

"The few citations relating to the national flag are found in the Constitution and in trademark laws on the permitted commercial use of the flag," he told AFP.

"There are no clauses which prohibit the military from shooting at a person bearing the national flag, and none declaring it as an act tantamount to treason."

"The flag doesn't give you any additional protection," he told AFP. "But the military or police shooting an unarmed civilian who is engaged in a peaceful protest would be an offence under the normal law."

"Outside a war situation, the general law applies, and shooting unarmed civilians engaging in nonviolent protest would amount to murder," he said.

The right to protest peacefully is enshrined in Article 14 (1) (b) of Sri Lanka's Constitution, which says that  "every citizen is entitled to the freedom of peaceful assembly".

AFP found no mention of the purported law mentioned in Facebook posts in the Sri Lankan Army, Navy and Air Force Acts.