Footage of a building collapsing after it was pummelled by missiles has been viewed thousands of times in social media posts that claim it shows a Russian strike on the Ukrainian defence ministry. However, the video shows Israeli strikes on a tower in Gaza in May 2021.

"The Ukrainian Ministry of Defence building was flattened by three missiles in an instant," reads a Facebook post shared on March 18, 2022.

"Russian troops did two extraordinary things before launching the missiles: 1) tell foreign journalists to take photos/videos nearby 2) tell the people in the building to evacuate."

The video, viewed more than 11,000 times, shows missiles raining down on a building before it crumbles to the ground under a huge cloud of dust. 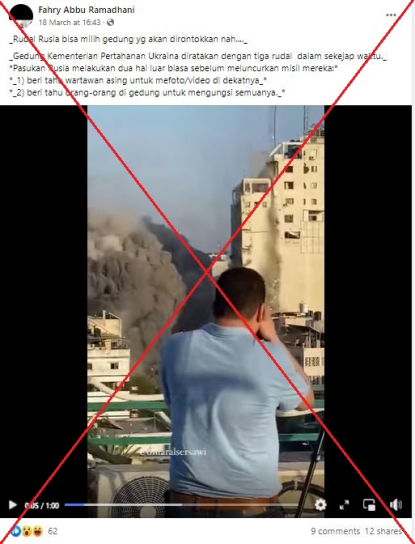 Russia has stepped up aerial and naval bombardment in Ukraine as resistance holds up the invaders' advance on land.

The video has been viewed more than 6,900 times after it was shared in similar posts across various platforms, including Facebook here, here and here; Twitter here; and TikTok here and here.

It also circulated with a claim in Arabic.

However, the video is circulating in a false context.

Keyword searches of the account @omaralsersawi, which is superimposed on the clip, found the same video posted on an Instagram account with the same handle on May 13, 2021.

The Arabic-language post reads: "The moment Al-Shorouk Building collapsed after being hit by the occupier planes".

The Al-Sharouk building, also written Al-Shorouk, in Gaza — which housed the bureau of several media outlets including the Al-Aqsa television channel — was hit by Israeli missiles on May 12, 2021.

It was one of four high-rise buildings flattened by Israeli air strikes in May 2021 during the worst spate of Israeli-Palestinian violence since 2014.

Below is the screenshot comparison between footage in the misleading post (L) and the video on Instagram (R). 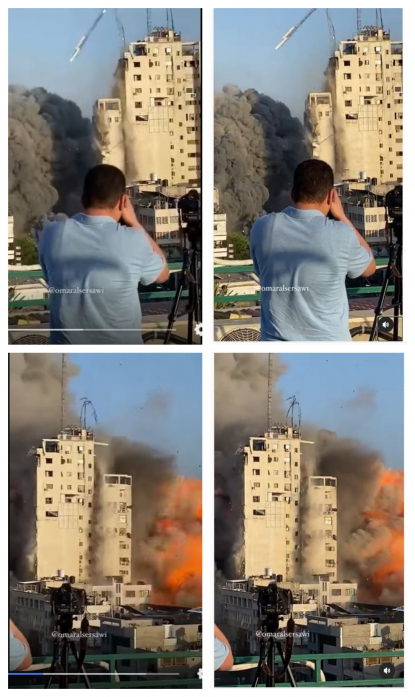 The clip was also published on Twitter by US broadcaster ABC News on May 14, 2021, which credits it to the same Instagram user.

AFP photos that show the Al-Sharouk building collapsing from a different angle and the aftermath of the attack can be seen here. 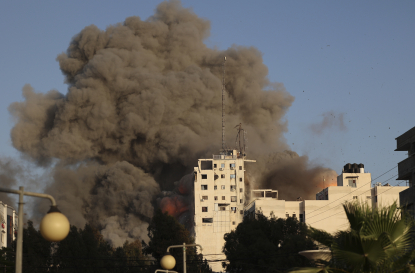 The collapse was also captured during a live report by a BBC journalist in Gaza on May 12, 2021.

Human Rights Watch said in a report in August 2021 that the strike was one of a string of attacks on high-rise buildings in Gaza by Israeli forces between May 11 and 15, 2021.

While tenants were warned about the impending attacks, the strikes also damaged neighbouring buildings and left several dozen families homeless, the report said.

As of March 29, 2022, there are no reports that the Ukrainian defence ministry's building is being attacked by Russia.