Social media posts shared in 2022 picture Ukrainian former professional boxer Wladimir Klitschko alongside text saying the athlete auctioned his Olympic gold medal to raise money for children in his home country. But the move is not related to the ongoing war with Russia; Klitschko sold his award in 2012, a decade before President Vladimir Putin ordered an invasion of Ukraine.

"Wladimir Klitschko has auctioned off his 1996 Atlanta Olympic Games gold medal to raise money for the children of Ukraine. He received around 1 MILLION dollars," said a March 14, 2022 Facebook post that was liked nearly 10,000 times but is no longer available. "The buyer gave Klitschko the medal back instantly when he heard what Wladimir was using the money for," it said. 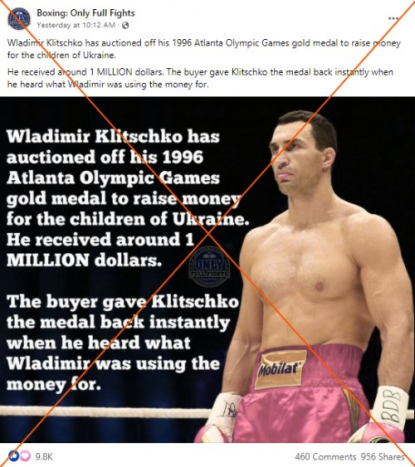 Some commenters seem to have been misled about the timing of the donation.

"He is truly a great person. He is defending his country instead of leaving. Him and his brother are really doing all they can to help Ukraine," one person wrote on March 15, referring to former boxing pro Vitali Klitschko, current mayor of the Ukrainian capital, Kyiv, and older brother of Wladimir.

The social media posts are 10 years out of date -- AFP reported that Wladimir auctioned his Olympic gold medal for charity in March 2012.

By selling it and other items, the world heavyweight champion raised about $1.5 million for Ukrainian children. But he soon got his medal back.

"Immediately after the sale, the buyer's representative announced his wish to leave the Olympic medal in the Klitschko family," the brothers' charity foundation said in a statement at the time.

As of March 16, 2022, more than three million Ukrainians had fled across their country's borders since the war began on February 24, according to the United Nations.

However, Wladimir and Vitali pledged to stay and fight. Wladimir signed up for the nation's territorial defense, insisting he wanted to protect his family, friends and relatives.

AFP Fact Check has debunked other inaccurate information about the war in Ukraine here.