Photo shows funeral of gun attack victims in 2014, not people executed in Saudi Arabia in 2022


Social media posts shared hundreds of times claim to show a photo of the funeral of some of the 81 people executed on a single day in Saudi Arabia on terrorism-related charges on March 12, 2022. In fact, the picture was taken at funeral processions for the victims of an attack by gunmen in Saudi Arabia in 2014.

"Scenes of the funeral prayers in Qatif for the 41 Shia youths who were martyred by the House of Saud's vicious government," reads an Urdu-language tweet posted on March 14.

The tweet, shared more than 350 times, shows a photo of crowds gathered around rows of caskets. 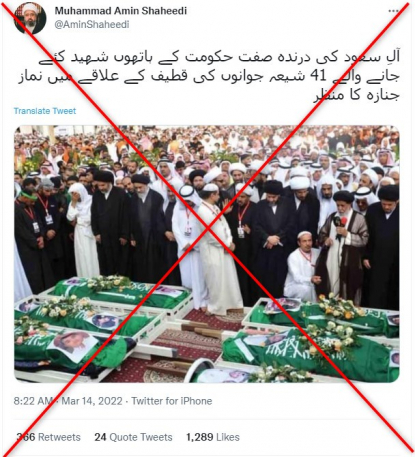 Saudi Arabia said it executed a record 81 people in one day on March 12 for terrorism-related offences.

The UN High Commissioner for Human Rights said that among those beheaded, 41 belonged to the Shiite minority, and had taken part in anti-government protests in 2011-2012.

The UN human rights chief condemned the killings and urged the kingdom to stop using the death penalty.

The picture actually shows funeral processions for the victims of a gun attack in Saudi Arabia in 2014.

It was published on AFP's website, where the photo caption reads: "Saudi mourners attend on November 7, 2014, the funeral of eight Shiite victims killed earlier this week by masked gunmen in the town of Al-Dalwa in Saudi Arabia's Eastern Province.

"Seven of the dead were killed when gunmen opened fire at a crowd, as Shiites commemorated Ashura, one of their holiest occasions."

Below is a screenshot comparison of the photo in false posts (left) and the AFP photo (right):

A reverse image search found the photo in reports by The Wall Street Journal and UAE-based The National in November 2014.

"Thousands of mourners joined the funeral on Friday of eight people killed during an unprecedented attack on minority Shiites in Saudi Arabia’s Eastern Province this week," The National reported.

"Senior Saudi officials denounced the 'terrorist' attack, which also led to the deaths of two policemen in a shootout with alleged suspects."