Photo shows aftermath of 2018 fire in Turkey, not 'elderly man in Ukraine'

A photo of an elderly man clutching a cat has been shared in social media posts around the world that claim he was seeking shelter from Russian shelling in Ukraine. While millions of people have fled Ukraine since the Russian invasion, the photo actually shows a man with his cat at the scene of a fire in Turkey in 2018.

Text superimposed on the photo reads: "UKRAINE - Mar. 2022. This photo of an elderly man walking with a cane, his little terrified cat in his weak hands, speaks volumes and elicits such sadness in my soul." 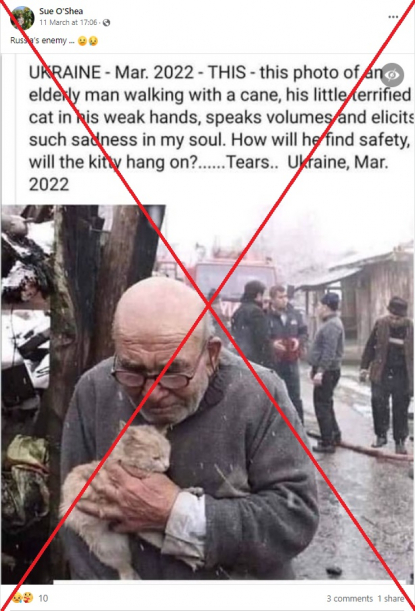 The photo was also shared in Facebook posts in the United States and Sri Lanka.

The posts circulated as Russian forces continued to bombard Ukrainian cities, including the capital Kyiv.

The United Nations estimates 3 million people have fled Ukraine and hundreds of civilian deaths have been recorded, including dozens of children.

However, the image has been shared in a false context.

Reverse image searches show the photo was taken in Turkey on January 17, 2018 after a fire broke out at the home of the man pictured.

The photo caption on AFP's archive names the man as 83-year-old Ali Mese and says the blaze was caused "after he tried to light a heating stove with gasoline" in Mudurnu, Bolu province.

The picture was taken by Ilhami Cetin for Turkish newswire Anadolu Agency. 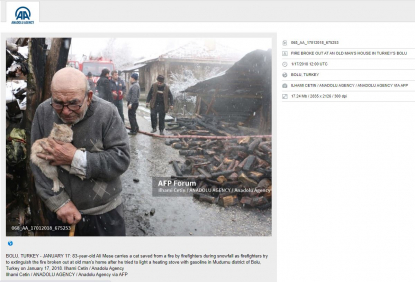 Cetin posted the photo on his Instagram page on January 18, 2018.

The photo took one of Anadolu Agency's top prizes in its annual photo awards for 2018.

"The photo of "Granpa Ali and his cat," captured by Ilhami Çetin, was chosen as the top photo in the life category," Turkish newspaper Daily Sabah reported.

"The photo was taken when the house of 83-year-old Ali Meşe was burned down in a fire. The photo of the elderly man was taken as he was hugging his frightened little companion."

The picture was published in various news reports in 2018, including by British media The Daily Mail and Metro.