A video has been viewed tens of thousands of times after it was shared in social media posts with a claim that it shows "a Ukrainian soldier killing Muslim Chechens during Ukraine's attack on Chechnya". However, the claim is false. The clip was actually taken from the opening scene of a French feature film called "The Search", which shows the execution of a Chechen family by Russian soldiers. The 2014 movie was set against the backdrop of the Russian-Chechen war in 1999. Since the fall of the Soviet Union in 1991, it was Russia — not Ukraine — that fought wars in Chechnya.

The one-minute, 52-second footage appears to show a soldier shooting an elderly man and then a woman following an argument.

The Urdu-language caption on the post translates as: "Time has turned the tables on the oppressor. When Ukraine attacked Chechnya, they killed an elderly Muslim man in cold blood when he was reciting verses of Koran. What goes around, comes around.” Chechnya is a republic in the southwestern part of Russia.

The same video has been viewed more than 29,000 times after it was shared on Facebook here, here and here with similar claims.

The posts appear to be blaming Ukraine by presenting it as the purported aggressor guilty of murdering civilians in Chechnya and suggesting it is now paying the price for those "crimes".

The posts circulated after Russian President Vladimir Putin announced the invasion of neighbouring Ukraine on February 24, 2022.

It has since killed hundreds of Ukrainian civilians and prompting more than two million more people to flee the country, AFP reported.

One misled Facebook user commented in English: "What goes around Comes round [sic]."

Another said: "History is full of atrocities carried out by British, French, Germans, Italians, Americans and Israelis and Russians and Ukrainians are no different."

Keywood searches found the clip was taken from the opening scene from a 2014 feature film titled The Search, directed by French director Michel Hazanavicius.

The movie's synopsis reads: "A French woman who works for a non-governmental organization forms a special relationship with a lost young boy in war-torn Chechnya in 1999."

The part leading to the execution scene can be seen at the 3:47 mark of the film uploaded onto YouTube here.

Below is a screenshot comparison of the video in the misleading post (L) and the genuine scene from the movie (R): 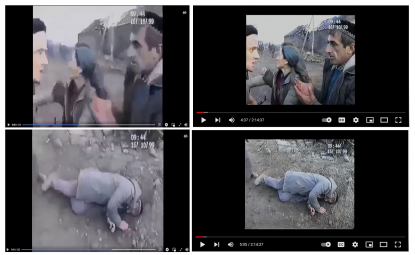 The Search premiered at the 2014 Cannes Film Festival.

In this interview, included in the film's press kit for the festival, director Hazanavicius talked about the opening scene that shows Russian soldiers shooting a Chechen family.

"The dirty, grainy video, a handheld camera, a format that is not yet the format of the film, all this seemed to me to be the most appropriate visual representation. It’s me holding the camera, for a sequence shot lasting five long minutes," he said.

In its review of the film, British newspaper The Guardian wrote: "There is no doubt about the power of the opening scenes. Drunk, cruel Russian soldiers taunt and terrorise Chechen civilians and execute a couple right in the front of their daughter Raissa (Zukhra Duishvili)."

Since the collapse of the Soviet Union in 1991, Russia — not Ukraine — fought wars in Chechnya.

Russian troops first invaded Chechnya to fight separatist rebels in 1994 and withdrew in January 1997, months before the signing of a peace treaty between Russian President Boris Yeltsin and Chechen leader Aslan Maskhadov.

After Putin became prime minister in 1999, he oversaw another military offensive against the rebels in the breakaway Muslim-majority region.

Human Rights Watch said between 3,000 and 5,000 people had disappeared in Chechnya since the beginning of the second Chechen war in 1999, with the full knowledge of the Russian authorities, AFP reported.