An image that appears to show an eBay listing for a Russian tank has been shared tens of thousands of times on social media alongside a claim Ukrainians are selling armoured combat vehicles after seizing them. The posts are false; the purported listing has been created using a stock photo that has circulated online since at least 2010. A spokesperson for eBay told AFP the listing was not genuine. According to its website, the e-commerce company does not allow military equipment to be sold on its platform.

The image was shared by a Tonga-based Facebook page here. 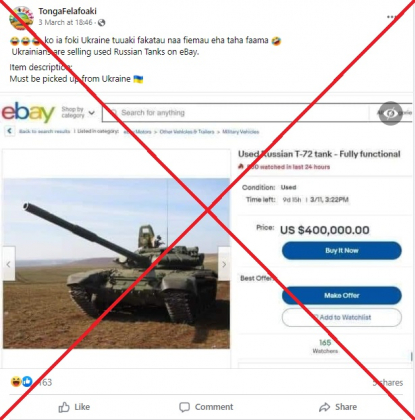 The post features an image that appears to show an eBay listing for a "used Russian T-72 tank" alongside a caption claiming "Ukrainians are selling used Russian Tanks on eBay".

The image circulated online after reports of Ukrainians capturing Russian weapons in the wake of a Putin-led invasion of the former Soviet country.

Armaments captured by Ukrainian civilians and soldiers will not have to be declared as income, Ukrainian news agency InterFax reported, citing the country's anti-corruption body the NAPC.

The conflict has so far caused over 1,400 civilian casualties and a growing humanitarian crisis in neighbouring countries that have accepted millions of refugees, according to the United Nations.

Similar claims have been circulated by Facebook users here, here and here. The image has also been shared alongside a similar claim on Twitter, Reddit and Tik Tok.

An eBay spokesperson told AFP in a March 10 email the image does not show a genuine ad found on eBay. "These posts do not represent images of actual, recent eBay listings," the spokesperson said.

The eBay website states here the sale of military items on the platform is "restricted" to surplus items like body armour, but "explosives and military ordnance aren't allowed on eBay".

"Military vehicles, including aircraft and ships, and their parts and accessories" are not allowed to be sold on the e-commerce platform, according to the website.

Keyword searches on eBay and Google revealed no results for the purported advert shared in the Facebook post.

Multiple reverse searches reveal the tank featured in the photo is a Russian T-72, but the image has been circulating since 2010 including here on a US-based military news website called DefenceTalk.

Below is a comparison of the image in the misleading Facebook post (left) and a screenshot of the DefenceTalk article (right):

An image comparison of the image in the misleading Facebook post (left) and a screenshot of the DefenceTalk article (right).