As fuel shortages continued to bite in crisis-hit Sri Lanka, a photo of bikers queuing at petrol pumps was shared repeatedly in Facebook posts alongside a claim it was taken during a previous fuel crisis in 2017. The posts defended the current Sri Lankan government, claiming fuel shortages were also a problem under the island nation's previous administration. Whilst the 2017 fuel shortage was well-documented, the photo has been shared in a misleading context: it actually shows bikers at a gas station in India in 2012.

"This is the fuel queue during the good governance era. There was no Covid then or any other issues but there were still petrol queues."

In late 2017, a fuel shortage rocked Sri Lanka after authorities turned away a shipment of about 40,000 tonnes of gasoline saying it was contaminated, AFP reported.

The shortage resulted in long queues at gas stations, as shown in AFP photos here and here. 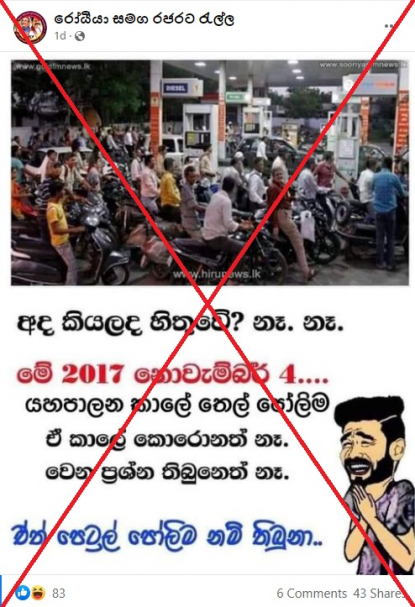 He replaced Maithripala Sirisena, who also ruled as part of a coalition led by the Sri Lanka Freedom Party from January 2015 until November 2019.

The post circulated online as Sri Lanka continued to endure a fuel and energy crisis caused by the worst economic crisis to hit the island nation since 1949, AFP reported.

The coronavirus pandemic battered the island's tourism sector -- a key foreign exchange earner -- sparking fears the country may not be able to repay its $51 billion foreign debt.

The same image was shared in multiple Facebook posts alongside a similar claim, including here and here.

However, the photo was actually taken in India in 2012.

It states the image was taken ahead of a petrol price hike in the western Indian city of Ahmedabad in May 2012.

The photo's caption reads: "Motorcyclists crowd a fuel station to fill up on petrol in the western Indian city of Ahmedabad May 23, 2012.

"State oil companies will raise the price of petrol on Thursday for the first time in more than six months in a gesture of fiscal discipline that economists said is unlikely to give a significant lift to the embattled rupee."

Below is a screenshot comparison of the photo in the misleading Facebook posts (left) and Reuters' photo (right):