Korean-language social media posts have shared multiple claims about a Covid-19 vaccine made by US pharma giant Novavax after South Korea's regulators approved the jab for use in January 2022. The posts suggest the Nuvaxovid jab is not safe for humans because it "contains moth and spider DNA", and claim more than 200 "cases of serious side effects" from the vaccine have been reported. These claims are misleading: as of March 11, 2022 Nuvaxovid has been approved as safe to use by health authorities in dozens of countries including South Korea. Experts told AFP the vaccine does not contain animal DNA.

The claims were shared here on Facebook on February 17, 2022.

The post's Korean-language caption translates in part as: "Novavax has not yet been approved by the [US] Food and Drug Administration and was only approved in South Korea.

"They say there is moth and spider DNA inside Novavax. There have also been 228 cases of serious side effects reported among 20,000 adults [who got the jab]."

Whilst it is true that the Nuvaxovid jab is awaiting approval from the FDA in the US, it has already been approved for emergency use by the World Health Organization (WHO) and the European Medicines Agency, AFP reported in December 2021.

In the same month, the European Commission authorised the vaccine in the EU for people 18 and over.

In Asia-Pacific, regulators in India, Indonesia, and the Philippines have also approved the jab for emergency use. 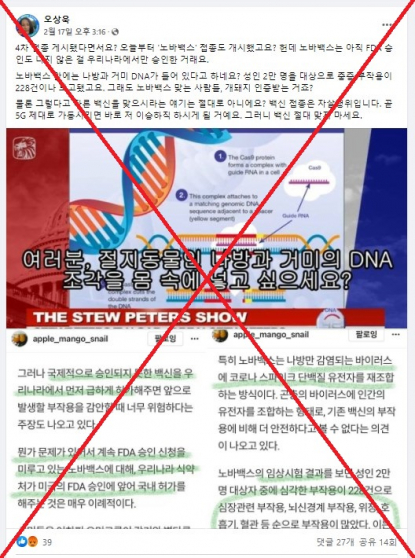 But the claims are misleading.

Multiple keyword searches found no credible studies or reports to support the posts' claim that the Nuvaxovid vaccine has caused "228 serious side effects reported among 20,000 adults".

The WHO stated here on December 21, 2021 that it had "thoroughly assessed the data on the safety and efficacy of the [Nuvaxovid] vaccine and has recommended its use for people aged 18 and above."

The recommendation was based on clinical trials in the United Kingdom, United States, and Mexico involving more than 45,000 people.

Professor Jung Jae-hun, a professor of medicine at the Gachon University College of Medicine and Science, told AFP there was "no possibility [that Nuvaxovid jabs] contain any form of DNA".

"Insect cells may be used to produce the spike proteins, but these cells are removed during the manufacturing process," Jung said.

The jab is manufactured by inserting genetic instructions into a different virus that is then used to infect moth cells, Professor Kim Woo-joo, an expert in infectious diseases at Korea University, told AFP.

The cells are then "purified to produce the vaccine," Kim said.

"Any nucleic acids [DNA or RNA] from the moths is removed in this purifying process."

The misleading posts also claim that the Nuvaxovid vaccine will lead to death "when they turn on 5G [technology]".

Throughout the pandemic, false claims have repeatedly circulated online linking 5G technology to the coronavirus or Covid-19 vaccines.