Posts mislead on factors behind US energy price spike

Social media posts claim a surge in gasoline and crude oil prices is being caused by US President Joe Biden's decisions to limit drilling and to halt the Keystone XL pipeline project. This is misleading; sharp swings in energy prices in 2022 come from a variety of factors, including a rebound in economic activity following low demand and little investment during the Covid-19 pandemic, and the OPEC cartel's reluctance to raise output.

"Since Joe Biden has been in office his polices has shut down the Keystone Pipeline and put restrictions on companies! Prices would be better right now if we were using our own oil," says a March 3, 2022 Facebook post. 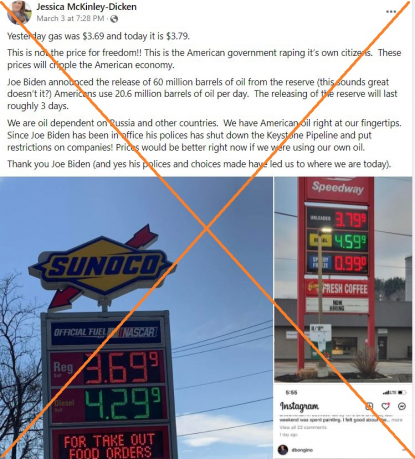 Similar claims -- which spread online as American consumers grapple with rising energy costs that have hit motorists at the pump -- appeared on Facebook, Twitter and Instagram. Russia's invasion of Ukraine has added to an already volatile energy market.

In the US, economists and market analysts say Biden's moves to limit drilling on federal lands and offshore are likely to impact future prices, but his policies are not short-term price drivers. Similarly, the Keystone XL project, blocked by his administration, was not expected to be in service until 2023 at the earliest, and thus did not immediately affect prices.

The United States was the world's largest oil producer in 2020, accounting for 20 percent of global output or 18.6 million barrels per day (bpd) -- a figure that includes crude, other petroleum liquids, and biofuels. The country was also the largest global consumer at 20 percent of world output in 2019.

WTRG Economics president James Williams, who has followed the oil sector for 35 years, said Biden's policies could boost prices in the medium-to long-term, but market forces over the past few years were more important elements in price swings.

From early 2020, "we had Covid, which depressed oil prices because it depressed demand," while the pandemic further reduced supply because low prices made it unprofitable to drill, Williams told AFP.

"The rule of thumb is that oil needs to be at $40 a barrel to break even, so you don't get much drilling until you get to $60," he said. "If it's at the edge of break-even, you're not going to drill because there is a lot of price risk."

With the global economy weakened by the pandemic, the price for benchmark West Texas Intermediate crude oil slipped as low as $11.26 a barrel on April 21, 2020, according to data from the research service Macrotrends. Prices even turned negative in that month as sellers had to pay to unload oil stocks.

Williams said that even with crude oil trading at more than $100 a barrel, there are obstacles to quickly ramping up production, including a shortage of equipment and a tight labor force. "We don't have enough truck drivers to haul water for fracking," he said.

Another major factor in oil markets worldwide is the OPEC cartel's unwillingness to raise output. Between December and January, OPEC members boosted their production by 64,000 bpd, far below their 400,000 bpd target. 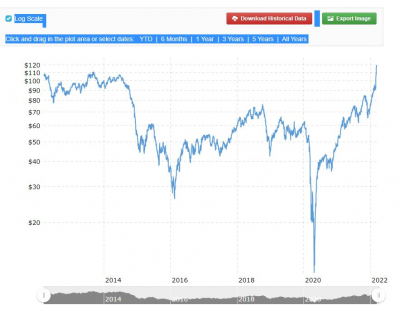 Screenshot of a 10-year oil price chart from Macrotrends

Ben Cahill, a senior fellow for energy security and climate change at the Center for Strategic and International Studies, agreed that the oil market was primed to rebound after a period of low prices.

"Years of underinvestment by the global oil industry had taken a toll, and low inventories and dwindling spare capacity had the market on edge," Cahill said in a blog post. "Even before Russia's attack on Ukraine, the oil market was sending strong signals that more supply was needed.

"After a decade of debt-fueled production growth but poor financial performance, companies have kept spending in check. When oil prices rose last year, they resisted the temptation to raise capital expenditures. Instead, companies used higher revenues to pay down debt and return cash to shareholders via dividends and share buybacks," Cahill added.

Biden's March 8, 2022 announcement of a ban on Russian oil imports did lead to a jump in prices as markets braced for more turmoil.

Analysts say Biden's policies are not seen as friendly to the oil industry as he pushes for cleaner energy. Cahill noted that the president could offer "concrete" measures to boost short-term production by waiving federal royalties or streamlining permitting.

Kenneth Medlock, senior director of the Center for Energy Studies at Rice University's Baker Institute for Public Policy, said economic demand and other market forces are generally more important than policies in Washington.

"No US president has ever been the primary reason for oil price movements, yet that narrative seems to persist every time prices rise regardless of who is in office," Medlock said.