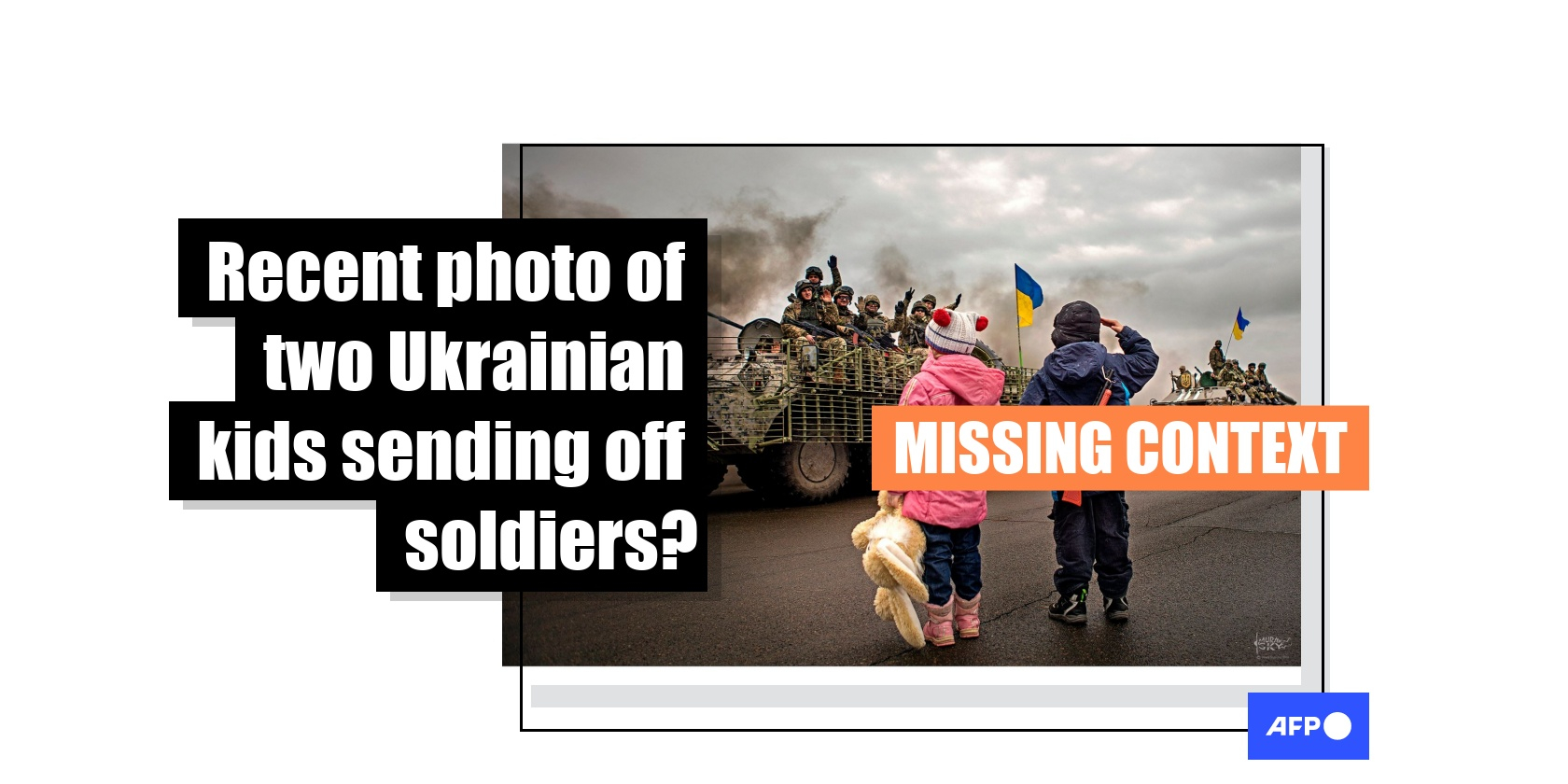 A photo of two children facing tanks has been shared alongside claims it shows Ukrainian kids saluting soldiers as they head off to battle Russian forces currently invading the country. But the image has been shared out of context: AFP Fact Check found the photo was taken in 2016 by Ukrainian photographer Dmitry Muravsky.

The photo shows the two kids in winter jackets holding hands, with one saluting troops standing on military tanks. The armoured vehicles bear Ukrainian flags and the background is filled with smoke.

“Two young Ukrainian children sending off soldiers to fight the Russians,” reads the caption of one Facebook post. “The kids holding hands, the girl holds a stuffed animal, the boy (her brother?) salutes. Look what he has on his back. This picture speaks a thousand words (sic).” 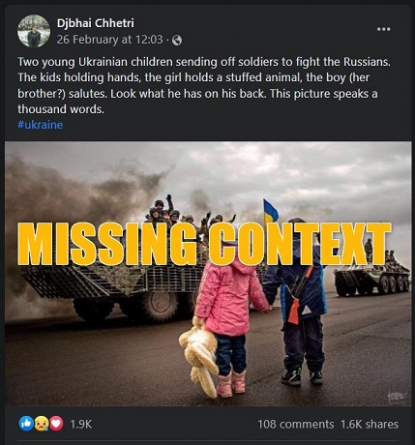 The post has been shared more than 1,600 times since it was published on February 26, 2022 — two days after Russia invaded Ukraine. The post creates the impression that the photo was taken recently during the ongoing war.

Social media monitoring tool CrowdTangle revealed that the photo was shared in similar social media posts around the world, including in Nigeria, India, Armenia, New Zealand, and the Philippines.

But this photo was taken more than six years ago and is unrelated to the ongoing Russian war on Ukraine.

AFP Fact Check ran a reverse image search on TinEye and found that the photo has been circulating online since 2016, two years after Russia’s seizure of Crimea. 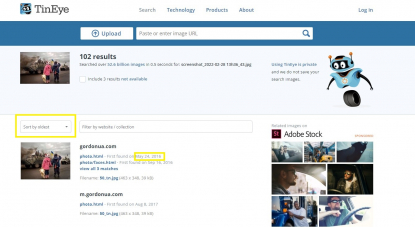 Screenshot from TinEye taken on February 28, 2022

Russia seized Crimea from Ukraine in 2014 following the ouster of its Kremlin-backed leader by mass protests in Kyiv. The takeover led to conflicts between the pro-Russian separatist regions of Donetsk and Luhansk in eastern Ukraine and the country’s military.

The photo, called “Children of War”, was published on the website of Ukrainian news outlet Gordonua. It is credited to Dmitry Muravsky. 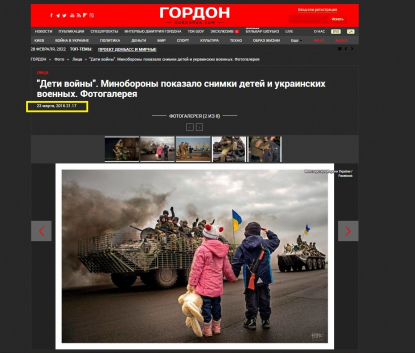 Screenshot taken from gordonua.com on February 28, 2022

The watermark of the Ukrainian photographer can also be seen in the bottom-left corner of the image.

The image was also included in a series of photos shared on Facebook by Ukraine’s defence ministry in 2016.

However, controversy erupted over the authenticity of his photos and whether they were staged or not.

AFP Fact Check sifted through Muravsky’s photos on Facebook and found the image in question was published in the "Children of War" album on March 22, 2016. The album also features several similar war-like images.

At the time, Ukrainian broadcaster 5 Kanal reported about the 2016 photo, which was taken when schoolchildren visited the eastern Ukrainian city of Dnipro (formerly Dnepropetrovsk until 2014).

At least 352 people, including 14 children, have died since last week’s invasion, according to Ukraine’s foreign ministry.

Moscow’s invasion has been condemned by the West and triggered harsh sanctions targeting the Russian economy and wealthy oligarchs.