Social media posts and news reports about Russia's invasion of neighbouring Ukraine have repeatedly shared an image of a burning jet alongside a claim that "six Russian fighter planes" were shot down. Whilst Ukraine's military said it had shot down six Russian aircraft on the first day of the invasion, the image has been shared in a false context. The photographer who captured the original image told AFP it was taken in 1993. The image corresponds to reports from 1993 about a crash involving Russian aircraft during a UK airshow.

"Six Russian fighter planes shot down; if these nations don't stop then its flames will spread everywhere #worldwar3 #wwiii #russiaukraine #war," reads the caption alongside the image shared on Twitter on February 24, 2022. 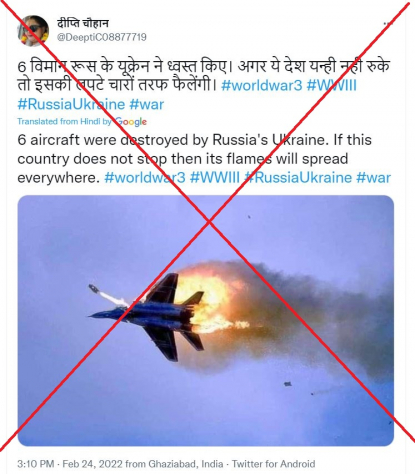 The post circulated online after the Ukrainian military claimed on February 24 to have downed five Russian planes and a helicopter in the east of the country near a rebel-held enclave, AFP reported.

"According to the Joint Forces Command, today, February 24, in the area of the Joint Forces operation, five planes and a helicopter of the aggressors were shot down," the army general staff said.

The same image was shared in Hindi-language news reports about Russia's invasion of Ukraine here and here.

The same photo was shared on Facebook here, here and here alongside a similar claim.

However, the image was shared in a false context.

A reverse search on Yandex found the image is a mirrored version of a photo published here on the aviation website Air Team Images.

The website states the photo was taken by Carl Ford in Fairford, United Kingdom on July 24, 1993.

"The first of a sequence of photos of the mid-air collision between two Russian Mig 29s. No one was killed or seriously injured in the incident," reads the photo's caption.

Below is a screenshot comparison of the image in the false posts (left) and the photo published by Air Team Images (right):

"This is my photograph and it's one in a sequence of 11 images of Russian planes I took with a motor drive on my Nikon F.3 HP on 24 July 1993," Ford told AFP in response to the false posts using the image.

"I was there as an individual but I do sell some of my photos on Air Team Images."

UK media outlet The Independent reported on the incident on July 26, 1993.

"A Royal Air Force investigation has begun into the cause of a mid-air collision between two Russian fighters at the world's largest airshow at the weekend," the report reads in part.

The crash was also referenced in a UK Parliament report on November 3, 1993.

Misinformation about Russia's invasion of Ukraine has circulated online since Russian troops began their offensive on February 24.

AFP has debunked inaccurate claims related to the conflict here.