Following Russia's invasion of neighbouring Ukraine, a photo of a woman dressed in military fatigues was shared hundreds of times in social media posts that claimed she is "the wife of the elected president of Ukraine". This is false: the photo shows a Ukrainian soldier during a military parade rehearsal in August 2021. As of March 11, 2022, there have been no official reports that the First Lady of Ukraine, Olena Zelenska, has been directly involved in armed combat.

The post's simplified Chinese-language caption translates to English as: "The wife of the elected president of Ukraine!" 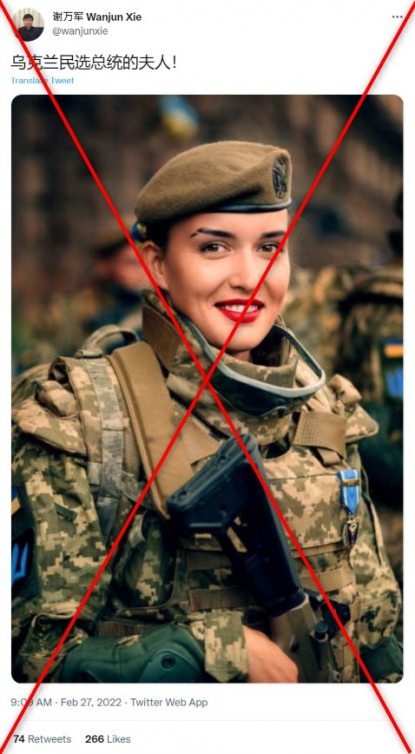 Russia's invasion of its pro-Western neighbour has since led to deadly conflict and a mounting civilian disaster, killing hundreds and forcing two million to flee in less than two weeks.

In an open letter to the global media on March 8, 2022, Olena Zelenska described the invasion as "mass murder of Ukrainian civilians" and called for a no-fly zone to be imposed over Ukraine, AFP reported.

As of March 11, 2022, there have been no official reports that she or her husband Volodymyr Zelenskyy has been directly involved in the fighting.

The same photo was shared hundreds of times alongside a similar claim here and here on Twitter.

A reverse image search on Google found the image published by UK-based photo agency Alamy on its website on August 22, 2021.

The photo is captioned: "Kyiv, Ukraine - August 22, 2021: Rehearsal of the military parade on the occasion of 30 years Independence Day of Ukraine. Ukrainian smiling female soldier in military uniform on Khreshchatyk street."

Khreshchatyk Street is the main street in Ukraine's capital Kyiv.

Below is a screenshot comparison of the photo in the misleading post (left) and the Alamy photo (right): 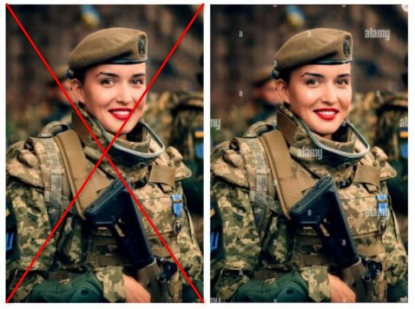 Screenshot comparison of photo in the misleading post (left) and the stock photo on Alamy (right).

The photo was also published here alongside the same caption on the website for Canada-based photo agency istockphoto.

Below is a screenshot comparison of the photo in the misleading post (left) and an AFP photo of Zelenska (right):

A screenshot comparison of the photo in the misleading post (left) and an AFP photo of Zelenska (right).

Other misleading social media posts shared hundreds of times on Facebook and Twitter claimed the pictured soldier is the wife of "Ukraine's vice president".

In fact, Ukraine does not have a vice president.

The country's cabinet has been led by Prime Minister Denys Shmyhal since March 2020.

Russia's invasion of Ukraine has triggered a wave of misinformation about the conflict. AFP has debunked various claims here.