A Facebook post claims a video shows fighting in Ukraine. This is misleading; most of the footage was shot in Syria and released by Kurdish forces, while part of the clip is taken from CNN coverage of Russia's invasion of Ukraine.

"New updates Ukraine vs Russia," says a February 27, 2022 Facebook post featuring the video, which has been viewed more than 85,000 times. 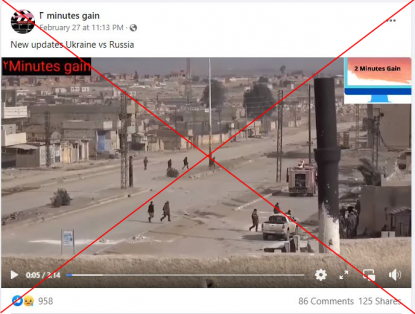 A screenshot taken on March 2, 2022 shows a video shared on Facebook

The clip -- depicting exchanges of gunfire among unidentified people with combat gear -- spread online after Russia invaded Ukraine on February 24, sparking a conflict that has pushed more than 800,000 people to flee the country.

A reverse image search showed that images from the video were broadcast by Arabic news channel Alghad TV on January 24 -- a month before Russia invaded Ukraine. The channel credits the footage to the "YPG press office."

"A statement from the Syrian Democratic Forces said that 300 gunmen from the Daesh organization surrendered at Ghwayran prison in Hasakeh in northern Syria," one Alghad anchor says, referring to the Islamic State jihadist group (IS).

A second anchor says: "The Syrian Democratic Forces attacked the prison and recaptured buildings controlled by Daesh after violent clashes between the two sides." The report then cuts to the images featured in the Facebook post about Ukraine.

An online search showed that the People's Protection Units (YPG), a Kurdish militia and principal component of the US-backed Syrian Democratic Forces, released the footage on January 23 on its official YouTube channel. 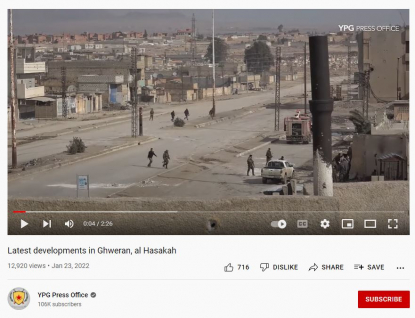 A screenshot taken on March 2, 2022 shows a YouTube video

The IS fighters stormed Ghwayran prison in northeastern Syria on January 20, sparking fighting that killed more than 300 people. Kurdish forces announced that they had defeated the jihadists 10 days after the initial assault on the jail.

The footage at the end of the video shared on Facebook are from US network CNN and depict a firefight outside of Ukrainian capital Kyiv, another reverse image search found. Correspondent Matthew Chance appears in the CNN clip.