A video of a plane engulfed in flames and falling from the sky has been viewed more than 1.5 million times in social media posts that claim it shows a Russian fighter jet shot down by Ukrainian forces in February 2022. In reality, the video predates the Russian invasion of Ukraine and shows a Libyan jet targeted by rebels in 2011.

"This video of Ukraine shooting down a Russian jet is an example of their bravery," reads a Hindi-language Facebook post shared on February 24.

"Ukraine is fighting with all its strength and has shot down Russian fighter jets but but for how long will it be able to resist'?"

The video, viewed more than 1.5 million times, shows a plane hurtling towards the Earth before it bursts into flames and crashes to the ground. 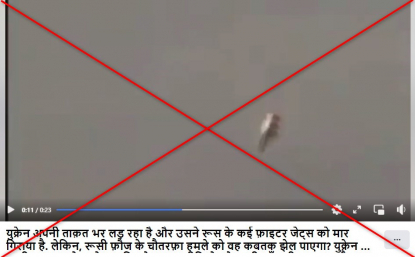 After days of intense fighting, hundreds of civilians have been killed, while around one million people have fled Ukraine since the invasion began, triggering punishing Western sanctions intended to cripple Russia's economy.

The clip was uploaded in a YouTube video titled: "Plane Shot Down by Libyan Rebels".

The video's description reads: "Libyan rebels shot down a warplane that was bombing their eastern stronghold Benghazi on Saturday, as the opposition accused Moammar Gadhafi's government of defying calls for an immediate cease-fire."

Below is a screenshot comparison of the video in the false posts (left) and the AP video (right).

Screenshot comparison of the video in the false posts (L) and the AP video (R).

The video was also broadcast by British broadcaster Channel 4 News in a report on the jet crash on March 19, 2011.

Russia's invasion of Ukraine has sparked a wave of misinformation. AFP has debunked false or misleading claims about the conflict here.