Video featured since 2020 in reports about Turkish attack in Syria, does not show Ukraine

After Russia pressed on with its invasion of Ukraine, a video surfaced in social media posts in various languages claiming it shows a Ukrainian drone attack on Russian tanks. But the footage -- which has been viewed tens of thousands of times -- has been shared in a false context. It has circulated since March 2020 in reports about a Turkish drone assault on Syrian forces. 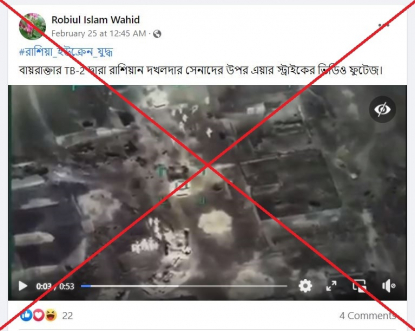 Bayraktar TB2 is a Turkish-made combat drone that gained prominence in recent years after being deployed in various conflict zones including Syria and Azerbaijan.

The fighting has claimed hundreds of civilian lives and forced one million Ukrainians to flee, according to the United Nations' refugee agency.

The video was viewed more than 180,000 times on YouTube here. 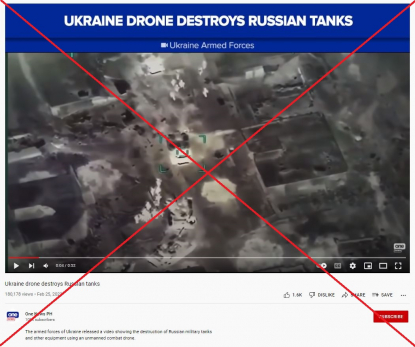 Screenshot of the misleading video taken on March 3, 2022.

The same footage was also viewed thousands of times on Facebook in other languages including English, Turkish and Spanish.

While Ukrainian officials have said they used the Turkish-made drones in the ongoing fight against Russia, the video shared in the social media posts has circulated before the Russian invasion of Ukraine.

Keyword and reverse image searches found the footage in reports about a Turkish drone assault on a convoy of Syrian forces in the northwestern Idlib province in March 2020.

Syrian broadcaster Orient posted the footage on March 3, 2020 in an Arabic-language tweet.

It translates to English as: "Bayraktar burns an Assad militia. 24 dead with military vehicles destroyed."

Syria's ruler Bashar Al-Assad has overseen one of the century's bloodiest conflicts and was first elected as president by referendum in 2000.

The same footage was tweeted here on the same day alongside a caption stating it shows an incident in the Syrian city of Marat al-Numan, just south of Idlib.

It reads: “A #Syrian #Regime convoy consisting of tanks and armored vehicles were completely destroyed by #TB2 armed #UAVs, near #MaratAlNuman, South #Idlib”.

"The 19 died in strikes on a military convoy in the Jabal al-Zawiya area and a base near Maaret al-Numan city, the Syrian Observatory for Human Rights said," the report said.