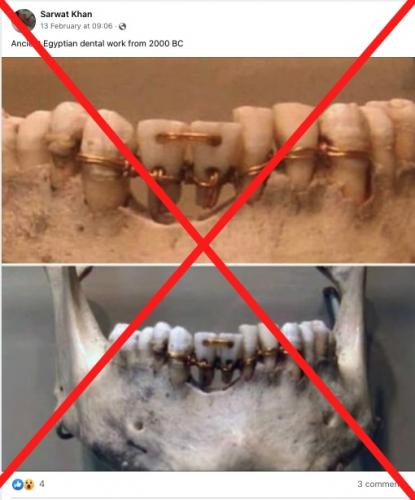 The images were shared hundreds of times alongside a similar claim by social media users around the world, including Albania, Bangladesh and Pakistan.

A reverse image search found the second of the two photos in an article by Forbes magazine which debunked various claims about "ancient skeletons".

It said the photo showed a model made by Italian dentist Vincenzo Guerini in the 20th century that was "supposedly modeled on an Egyptian mummy".

"Whether Dr. Guerini actually saw an Egyptian mummy with this sort of dental appliance is still unknown, as such a mummy does not currently exist," the article reads.

It added that the model was kept at the National Museum of Dentistry at the University of Maryland in Baltimore.

Contacted by AFP, the museum's curator Dr Scott Swank confirmed that the photos in the Facebook posts showed a model made by Guerini "circa 1901", which depicted "bridgework using human teeth held in place either via gold wires or gold bands".

He provided AFP with a photo of the dental work on display at the museum. 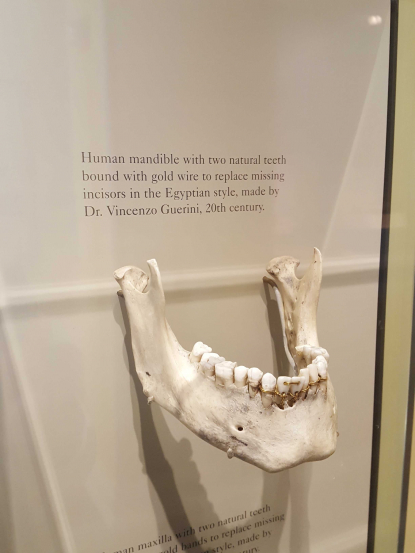 "Literature claiming that the ancient Egyptians could make gold fillings and other dental appliances derives largely from nineteenth century allegations and fabrications of evidence," said Dr Roger Forshaw, an expert in Biomedical Egyptology at the University of Manchester.

There is "no real evidence" dental surgery was practised in ancient Egypt besides evidence showing the potential extraction of a few teeth, he told AFP.

Only three examples of gold wire holding teeth together have been attributed to the ancient Egyptians and two were likely applied post-mortem in preparation for the afterlife, Forshaw wrote in 2009.

He said the gold-wire teeth model was most likely a copy of an appliance from Phoenicia, an ancient country situated primarily in modern-day Lebanon.

In Guerini's 1909 book "A History of Dentistry", he refers to discoveries made by French naturalist Dr Charles Gaillardot at the Phoenican city of Sidon, which featured gold wire holding teeth together.

"Dr. Gaillardot found, in the midst of the sand that filled the grave… a part of the upper jaw of a woman, with the two canines and the four incisors united together with gold wire," Guerini wrote.

The book features drawings on page 33 which correspond to the models seen in misleading Facebook posts.