Multiple posts on Facebook are purporting to show how the Chinese are using advanced technology to allow cows to lay chicken eggs for increased production. However, this is false; the image of cows purportedly laying eggs was digitally manipulated. There is no available technology that allows cattle to do this.

A Facebook post shared thousands of times since it was posted on February 17, 2022, shows several cows lying on their sides each laying a clutch of eggs.

“The Chinese government has once again shown its advances in technology, and this time in the animal kingdom. The Chinese planted organs of gall in other animals for faster egg production (sic).” 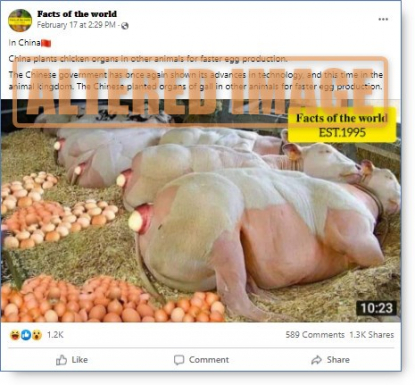 The photo has also been shared more than 7,000 times in French since February 15, 2022 (here, here, here and here) and the claim is circulating in several African countries, including Côte d'Ivoire, Burkina Faso and the Democratic Republic of Congo. AFP Fact Check debunked the claim in French here.

A reverse image search found the original picture on the Institute for Basic Sciences (IBS) website, a South Korean scientific research centre. There are no eggs, however, in the original image.

The photograph is credited to Eric Forget and shows Belgian Blue cows, according to the caption, which are a breed of cattle “famous for its impressive muscling which is commonly referred to as ‘double muscling’,” as The Cattle Site explains. 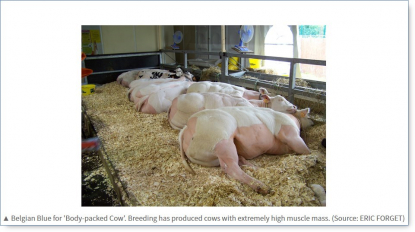 A screenshot of the picture as it appears on the IBS website, taken on February 22, 2022

Forget’s photo was taken on July 26, 2008, at the Libramont agricultural fair in southeast Belgium, as seen also on his Flickr account. 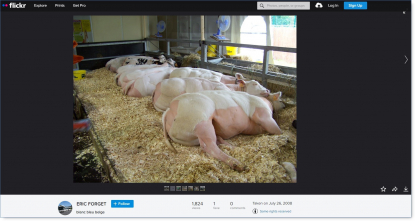 The photographer has not yet responded to AFP's requests for comment sent on February 18, 2022. We will update this fact check if we receive a response.

Another reverse image search using Tineye allowed us to locate where the viral photo likely came from. 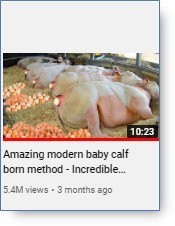 A screenshot of the YouTube thumbnail, taken on February 22, 2022

The channel sharing the video, Sky Creative HD, claims to offer the “best videos” about technology. Their video titles are eye-catching, and many of the thumbnails promote spectacular or shocking claims.

No such "progress" in husbandry

AFP Fact Check could not find any other references online to technical “advances” that would allow cows to lay eggs -- in China or anywhere else.

"I don't think there is any such 'progress' in China," confirmed Yayu Huang, a livestock engineer at the School of Agricultural and Life Sciences (Ecole Nationale Supérieure Agronomique de Toulouse - Ensat) working in partnership with France’s National Research Institute for Agriculture, Food and Environment (Inrae).

Huang, who has taken part in several joint Franco-Sino projects on nutrition for herbivores and the feeding of these animals in recent years, said that progress in animal production is more in the area of "genetics and classical zootechnics".

In any case, Huang does not consider such a development plausible, explaining that there is no point in making cows lay eggs because "laying hens are selected to produce eggs and they are already very efficient".