Indonesian religious teacher sentenced to life in prison, not executed, for rape of 13 students

Various blog articles shared on Facebook claim a religious teacher in Indonesia convicted of raping 13 students was executed for his crimes. The claim is false; Herry Wirawan was sentenced to life in prison, not execution, according to court documents and news reports.

"Goodbye forever, Sir. An Islamic boarding school teacher who raped a dozen of his female students is executed today, shot to death," reads an Indonesian-language blog article published on February 15, 2022.

The case of Herry Wirawan, a religious teacher who raped 13 female students — all minors — and impregnating at least eight of them has drawn national attention to sexual abuse in some of Indonesia's religious boarding schools. 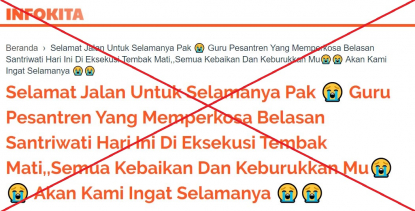 Screenshot of the headline of the misleading blog article, taken on February 21, 2022

The blog article contains details about the prosecutors' demand to a court in Bandung, Indonesia's West Java province, on January 11, 2022, to sentence Herry to death for his crime.

The prosecutors' demand in the January trial was covered by Indonesian media, such as Kompas.com and The Jakarta Globe.

Crimes including child rape, murder and drug trafficking can carry the death penalty in the Southeast Asian nation, although cases are often reduced to long jail terms.

Various blog articles published the same claim here and here, and they were shared on Facebook here, here and here.

On February 15, 2022, the Bandung District Court sentenced Herry to life in prison after he was  found guilty of raping 13 students, all minors, and impregnating at least eight of them, AFP reported.

The court ruling, uploaded on the Indonesian Supreme Court's website, says Herry was sentenced to life imprisonment, not execution.

The West Java prosecutors' office lodged an appeal to the ruling on February 21, 2022, local media including Antara news agency and CNN Indonesia reported.