Photos of women in headscarves taken on Indian independence day, not hijab protests

Facebook posts sharing photos of women wearing headscarves in the colours of the Indian flag claim they are Muslim students rallying against a hijab ban in schools in southern India. The posts circulated as nationwide protests over the ban swept the Hindu-majority country in early 2022. In fact, the photos have circulated in news reports since 2017 about Indian independence day celebrations.

"The hijab was banned in school and colleges, so girls went to their educational institutes wearing hijabs with the national flag. This was an unprecedented protest of Karnataka girls," reads a Bengali-language Facebook post shared on February 10.

Protests spread across India after schools in the southern state of Karnataka banned the Islamic headscarf in classrooms in December 2021. 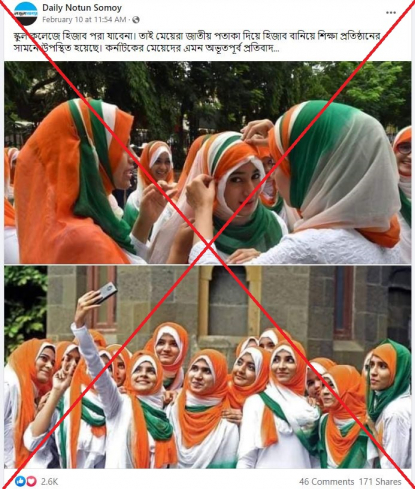 In response to the demonstrations, Hindu teenagers gathered in saffron-coloured shawls symbolising their own religion.

Schools in Karnataka were temporaily shuttered in February 2022 in a bid to calm the row, which has heightened tensions between India's majority-Hindu population and Muslim minority.

The photos were also shared here and here with similar claims.

Keyword searches and reverse image searches found the photos in news reports about Indian independence day celebrations at the Anjuman-I-Islam college in Mumbai in 2017 and 2019, years before the Karnataka hijab row.

The first photo was published by Indian newspaper The Hindu on December 30, 2019 in a report titled: "The most liked images from The Hindu on Instagram in 2019". 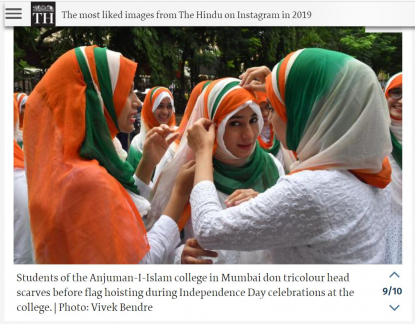 Screenshot of the image on The Hindu's website taken on February 23, 2022

Below is a screenshot comparison of the photo in misleading Facebook posts (left) and the photo in The Hindu’s report (right):

The image was also posted on The Hindu’s Instagram page on India's independence day on August 15, 2019.

The second photo was published on August 15, 2017 by news outlet IndiaTV with the caption: "Students from Anjuman Islam College take a selfie on the occasion of Independence Day, in Mumbai on Tuesday. (Image source: PTI)".

PTI refers to the Press Trust of India, a Delhi-based news agency.

Below is the screenshot comparison of the photo shared in misleading Facebook posts (left) and in the news report (right):

The photo was also credited to PTI by other media outlets here and here alongside similar captions.

Contacted by AFP, the principal of Anjuman-I-Islam college, Shama Tarapurwala said the photos showed her students.

"The images are indeed from our school," she said. "We celebrate Independence Day each year like this."