Image shows Woodstock festival in 1969, not Australian anti-vaccine rally in 2022


An aerial image of a large crowd has been shared hundreds of times in social media posts that claim it shows "1.5 million showed up for a Freedom March/Rally" in Australia. The posts circulated online days after police said thousands of protesters rallied against Covid-19 vaccine mandates in the Australian capital Canberra. In reality, the image shows revellers at the Woodstock music festival in 1969.

The image was shared here on Facebook on February 16.

Text overlaid on the image reads: "This is happening right now...in Australia!! 1.5 Million showed up for a Freedom March/Rally." The image's caption states: "And not Ten thousand people but 1.5 million as all the channels would like you to believe."

The Australian Federal Police previously told AFP that there were up to 10,000 people at the protest.

The demonstration was part of the Convoy to Canberra movement, a spin-off of the so-called “Freedom Convoy” that has paralysed the Canadian capital Ottawa for more than two weeks.

The same image was also shared hundreds of times alongside a similar claim in Facebook posts here, here and here.

However, the image was not taken in Australia.

"Aerial view of the massive crowd in attendance at the Woodstock Music and Arts Fair in Bethel, New York, August 15 - 17 (and part of the 18th), 1969," reads the caption.

The photo is credited to photographer Barry Z Levine.

Below is a comparison between the image in the misleading post (left) and the Getty Images photo (right):

The same image of the Woodstock festival has been shared in other misleading posts in recent years.

Some social media users attributed the image to a 2019 Trump rally in Pennsylvania, while others claimed it shows a 2016 protest against an oil pipeline in North Dakota.

Below is a comparison of the image in the false post (left) and a satellite view of Australia's Parliament House, as it appears on Google Maps (right): 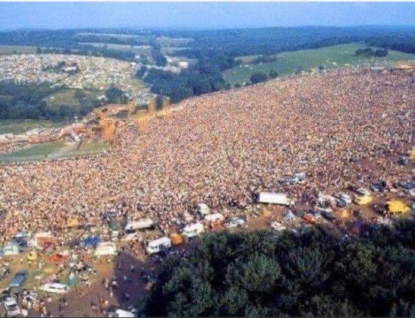