This video shows the eruption of Anak Krakatau volcano in 2018, not 2022

Footage of a dramatic volcanic blast is circulating in social media posts that claim it shows the eruption of Indonesia's Anak Krakatau in February 2022. The claim is false; the video shows the same volcano erupting in December 2018, days after it unleashed a deadly tsunami.

The video shows onlookers filming the eruption from a ship. 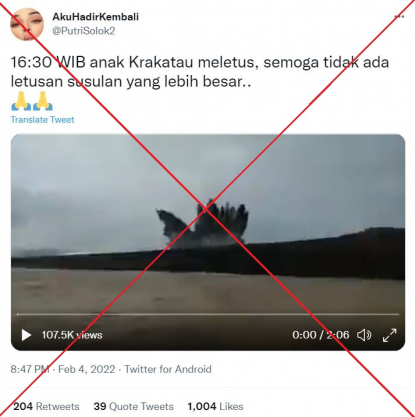 Anak Krakatau is a volcano in the Sunda Strait between Java and Sumatra Islands.

The volcano erupted on February 4, 2022, spewing a kilometre-high ash plume, according to the Center for Volcanology and Geological Hazard Mitigation.

The same video has been viewed more than 25,000 times in similar posts on Facebook here, here and here; on Twitter here and here; and on YouTube here.

However, the claim is false. The footage shows Anak Krakatau erupting in 2018.

A reverse image search on Yandex followed by keyword searches on YouTube found a longer video posted here on January 3, 2019, titled: "Anak Krakatau erupts again..!! This is the closest VIEW from the Indonesian Navy Ship".

Below is a screenshot comparison between footage in misleading posts (left) and the video on YouTube (right). The clip also appeared in this news programme from local broadcaster tvOne on January 4, 2019, titled: "The Story of KRI Rigel 933's Commander Witnessing the Eruption of Anak Krakatau Closely".

In the interview with tvOne, the KRI Rigel 933 commander, Agus Trijaya, said the video was filmed by an officer from the naval ship in December 2018.

"The eruption actually happened on December 30 when we had just finished helping to rescue a fisherman between 1 pm to 7 pm," he said.

Anak Krakatau erupted and subsequently collapsed on December 22, 2018, with parts of it sliding into the sea and triggering deadly waves that killed more than 400 people and injured thousands. The volcano continued to erupt for several months afterwards.

The National Disaster Mitigation Agency's press release, shared to journalists via WhatsApp on February 5, 2022, said that the video was old.

"We need to clarify that the video is a documentation of the 2018 eruption of Anak Krakatau (after the tsunami)," it said.