Social media posts shared repeatedly in February 2022 claim the ski jump venue at the Beijing Winter Olympics is at the site of a converted nuclear power plant. The claim is false. While the stadium's striking industrial backdrop has provoked debate online, the venue was actually constructed at the site of a former steelworks, which shipped its last batch of steel wires in December 2010.

The user retweeted photos of the Big Air Shougang stadium in Beijing, which is surrounded by huge cylindrical towers.

The stadium is one of more than a dozen venues used for events at the Beijing Winter Olympics and is staging skiing and snowboarding competitions. 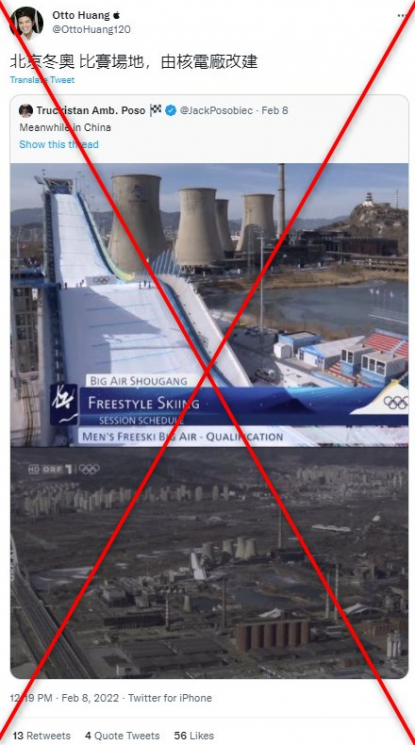 Some social media users appeared to believe the stadium was genuinely built on the site of a nuclear power plant.

"Probably a lifetime of radiation overdose," one person commented.

The same image was shared repeatedly alongside a similar claim on Facebook here, here, here, and here; and on Twitter here and here.

The claim is false: the Big Air Shougang was built on the site of a former steelworks, according to the official Beijing 2022 website.

"Arguably the most unique venue of the Beijing 2022 Winter Olympics is Big Air Shougang, which has been built on a former steel mill site, set against the backdrop of four industrial cooling towers," it says.

AFP reported that the old steelworks once employed more than 200,000 workers.

In an effort to clean up the air ahead of the 2008 Beijing Summer Olympics, the Chinese government in 2005 ordered the factory to begin moving production away from the city.

It shipped its last batch of steel wires in December 2010.

Below is an AFP photo of the venue: 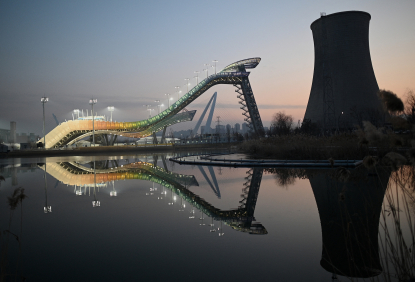 A view of the Shougang Big Air venue, which will host the big air freestyle skiing and snowboarding competitions at the Beijing 2022 Winter Olympics, is seen at Shougang Park in Beijing on December 15, 2021. ( AFP / NOEL CELIS)

The plant, constructed in 1919 and operated by the now state-owned steel giant Shougang Group, had the capacity to make 10 million tonnes of steel per year at its peak, according to state news agency Xinhua.