Do white people own ‘only’ 22 percent of South Africa’s land?

A meme widely shared on Facebook claims that white people “privately own” 22 percent of the land in South Africa. Tapping into racial tensions that have endured long after the end of apartheid, it asks why so much focus is placed on white ownership if nearly 80 percent of  South African land is owned by others. The meme uses figures taken from a 2017 government report, but it uses them to make a calculation that doesn’t reflect the full range of data. The data we do have indicates a much higher level of white ownership. 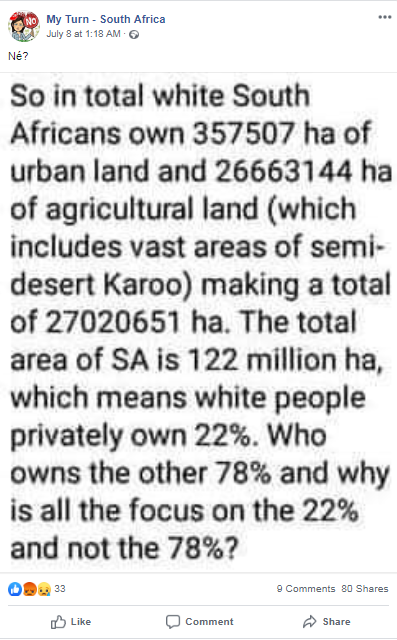 This made it easy to track down where they came from -- the 2017 Land Audit Report published by the Department for Rural Development and Land Reform.

But the report makes clear that the ownership situation is more complicated than the meme suggests.

More than 20 years after the end of apartheid, land reform remains a highly contentious issue in South Africa. Millions among the black majority were dispossessed under white-minority rule, and land redistribution was a fundamental principle of the governing African National Congress (ANC) during the struggle against apartheid.

The 2017 Land Audit was carried out in a bid to assess the extent to which ownership of South Africa’s land reflects the demographic make-up of the country.

The report breaks down all of the registered land in South Africa into various different categories depending on who owns it: individuals, companies, community-based organisations, trusts and land that is co-owned by more than one entity.

It’s difficult to break down land owned by companies and other organisations by race -- a company, for example, might be made up of various people from various different backgrounds. “These entities cannot be racially classified,” the report says.

For this reason, the Land Audit only gave breakdowns of the race, gender and nationality of the owners of land held privately by individuals.

That accounts for just over 37 million hectares -- about a third of the registered land in South Africa. Large chunks of the rest are held by companies (25 percent) and trusts (31 percent).

That’s something to bear in mind when considering the figures we’re going to talk about next.

Within the category of land owned by individuals, the report pointed to much greater concentrations of ownership by white South Africans -- who make up just 7.8 percent of the population, according to Statistics South Africa -- than the meme would suggest.

The report breaks down the land privately owned by individuals into three categories: farming and agricultural land; “erven” land, which is urban land or land that can be built on; and “sectional title owners”, which refers to people who own part of an estate or building complex.

Let’s look at each of them in turn.

This chart is where the meme’s author found the figure of 26,663,144 hectares for the total farm and agricultural land owned by white people.

These 26.7 million hectares may not make up that big a proportion of the total South African landmass, but comparisons within the category show that white owners hold 72 percent of all of the registered land in the country used for agriculture and farming.

That compares to 15 percent of the land held by coloured owners, five percent by Indians and just four percent held by black people.

Similarly, the meme quotes an accurate figure for the amount of erven, or urban land, owned by white people: 357,507 hectares. Within the category, this means white ownership accounts for 49 percent of the total, compared to 30 percent black ownership and eight percent each for coloured and Indian owners.

A breakdown of urban land ownership, as seen in the Land Audit Report

Part-ownership in estates and complexes

The meme left out figures from the third type of land included in the Land Audit’s racial breakdown -- “individual sectional title” ownership, which typically refers to people who have bought a unit within an estate or complex.

This makes up a much smaller area of land than the other two categories.

This chart from the report shows that white owners make up 45 percent of the ownership in the category, compared to 21 percent for coloured owners and 17 percent for black owners.

Part-ownership in estates and complexes, as detailed in the 2017 Land Audit Report

Why the meme is misleading

The figures used in the meme are genuine figures that appeared in the Land Audit Report.

But a person who just saw the meme, without reading the full report, might come away with the impression that only 22 percent of South African land is owned by white people.

The full report suggests much higher concentrations of white ownership within each category for which we have racial data.

And we should bear in mind that this data only gives an idea of the racial ownership breakdown for about a third of South Africa’s land -- it doesn’t include any of the land owned by companies or trusts. None of the land held by companies run by white business owners, for example, is included in the “22 percent” figure cited by the meme.

The report, in any case, had other limitations when it came to the data on race, which the authors themselves acknowledged.

It was based on data from the Deeds Office, which does not collect data on individuals’ racial background.

The audit used indirect methods to try to piece together a picture of the racial make-up of land ownership, drawing on information from various different databases including the population register and census data.

These indirect methods, using "a combination of names, surname and ID number or date of birth”, exposed the audit to “the risk of under- or over-reporting", the report acknowledged.

As reported by AFP, President Cyril Ramaphosa has vowed to speed up land reform by pushing “expropriation without compensation” -- raising the threat of enforced seizures that has alarmed investors.

You can read more about land ownership in South Africa in this report from Africa Check.