Skip to main content
(From L) Presidents Muhammadu Buhari of Nigeria and Nana Akufo-Addo of Ghana pose after the opening ceremony of ECOWAS G5 security summit in Ouagadougou, on September 14, 2019. (Photo by ISSOUF SANOGO / AFP)

Facebook posts shared more than a thousand times claim a Nigerian official threatened to invade Ghana after one of Abuja’s embassy buildings there was bulldozed. The claim is false; both Nigerian and Ghanaian authorities blamed the demolition on armed men with no government ties. Ghana has also denied receiving an ultimatum from Nigeria to rebuild the structure.

One Facebook post shared hundreds of times and archived here claims that Nigeria accused Ghana of destroying one of its embassy buildings and threatened to invade the neighbouring country. The post quoted Nigeria’s Information Minister Lai Mohammed as purportedly saying: “If they failed to rebuild that house in seven days and render apologies to Nigeria, we will invade Ghana and completely destroy it!” 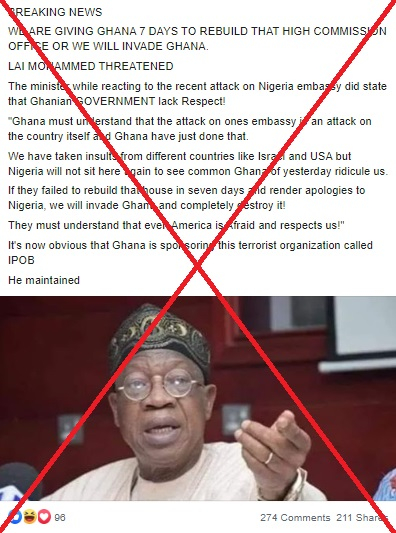 A similar Facebook post shared more than 350 times also claims that Ghanaian President Nana Akufo-Addo announced Buhari’s death. “You cannot represent a dead man in my country,” the post claims to quote Akufo-Addo saying. “Report me to your dead president that I demolished Nigeria embassy in Ghana (sic).”

Another post here alleges that the Ghanaian president “had vowed that there will be no Nigeria high commission in Ghana under his Leadership because Nigerians are bringing corruption to their country”.

Other posts making similar claims about the Nigerian High Commission have been shared here, here and here.

As reported by AFP, a building at the Nigerian High Commission in Accra was indeed demolished on June 19, 2020, prompting Ghana’s President Nana Akufo-Addo to issue an apology.

Ghana launched a probe into the incident, which saw armed men reportedly enter the compound to supervise bulldozers demolishing a building under construction.

A businessman who had claimed that the quarters were built on his land led the demolition, according to Nigerian diplomatic officials in Accra.

Traditional rulers in the city have long complained that the Nigerian High Commission was encroaching on land they owned.

Nigerian Foreign Minister Geoffrey Onyeama said in a press conference in June that “non-state actors” had pulled down the building. He demanded “urgent action to find the perpetrators and provide adequate protection for Nigerians and their property in Ghana”.

AFP Fact Check found no reports in local or international media that Nigeria gave Ghana seven days to rebuild the demolished parts of the Nigerian High Commission. Mohammed, the Nigerian minister who allegedly made the threats, has not publicly commented on the matter. AFP Fact Check has contacted his office but has not yet received a reply.

Ghana’s Foreign Minister Shirley Ayorkor Botchwey released a statement on June 26, 2020, stating that the individuals who carried out the demolition had been identified. She assured Nigeria that the building would be “restored to its original state”.

Ghana’s deputy foreign affairs minister Charles Owiredu told AFP Fact Check that he is not aware of any ultimatum from Nigeria.

“I'm not aware and this is news to me. It has never come to our attention. The government of Ghana has promised to rebuild the structure and that is the official position now. We’re already doing that so an issue of a seven-day ultimatum does not come in at all,” said Owiredu.

Buhari has made public appearances after the latest Facebook posts reporting his death surfaced.

AFP Fact Check also found no evidence of the Ghanaian president announcing Buhari’s death. According to the Nigerian presidency, both presidents spoke on the phone on June 23, 2020, to discuss the demolition.

There have been various rumours of Buhari’s death in recent years. AFP Fact Check has tracked the misinformation to multiple pages run by individuals and groups in support of the independence of Biafra in eastern Nigeria.

A rumour that Buhari died and was replaced by a lookalike from Sudan was pushed by Nnamdi Kanu, leader of the Indigenous People of Biafra (IPOB), in 2017, after Buhari travelled to the UK for medical treatment.

AFP Fact Check has also debunked false claims that Buhari died and was replaced by his wife.